On Demand, Development and Dependence: A Review of Current and Future Implications of Socioeconomic Changes for Integrated Water Resource Management in the Okavango Catchment of Southern Africa
Previous Article in Journal

The Effectiveness of Conservation Reserves: Land Tenure Impacts upon Biodiversity across Extensive Natural Landscapes in the Tropical Savannahs of the Northern Territory, Australia

By 2050, 90% of the population in Latin America will live in cities, but there is a lack of up-to-date spatial information about the urban extent and patterns of urbanization in cities of this region. In this study, we analyzed population growth, urban density and urbanization dynamics between 1992 and 2009 in the major cities of Bolivia, Colombia, Ecuador and Perú using Google Earth and DMSP/OLS night-time lights imagery. We used Google Earth to map the urban extent, and time series of night-time lights to analyze spatial patterns of urban development. The dominant urban development patterns were: high-density compact in Bogotá, Cali, Guayaquil, and Medellín; high-density expansive growth in La Paz/El Alto; low-density expansive in Quito and Santa Cruz; and a mix of high-density compact and suburban growth in Lima. Urban growth occurred largely along the periphery of cities, influenced by the local landscape and by demographic and socioeconomic factors such as immigration and housing prices. Urban density in Colombia (>20,000 per/km2) was among the highest in the world. Future growth in the region will probably be characterized by densification and slow urban expansion. This study also validates the utility of Google Earth and night-time lights for monitoring urbanization. View Full-Text
Keywords: DMSP/OLS night-time lights; Google Earth; population change; urban development; urban density; Bolivia; Colombia; Ecuador; Perú DMSP/OLS night-time lights; Google Earth; population change; urban development; urban density; Bolivia; Colombia; Ecuador; Perú
►▼ Show Figures 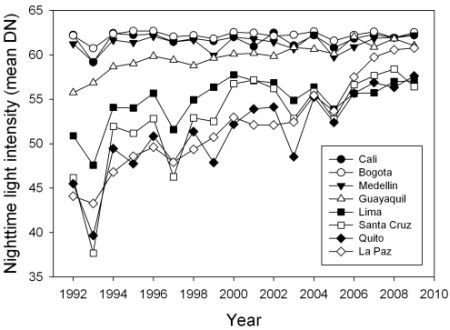