Freshwaters in China are affected by point and non-point sources of pollution. The Wujiang District (Suzhou City, China) has a long history of canals, rivers, and lakes that are currently facing various water quality issues. In this study, the water quality of four rivers and a lake in Wujiang was assessed to quantify pollution and explore its causes. Seventy-five monthly samples were collected from these water bodies (five locations/samples per area) from August to October 2020 and were compared with nine control samples collected from a water protection area. Fifteen physicochemical, microbiological, and molecular–microbiological parameters were analyzed, including nutrients, total and fecal coliforms, and fecal markers. Significant monthly variation was observed for most parameters at all areas. Total phosphorus, phosphates, total nitrogen, ammonium–nitrogen, and fecal coliforms mostly exceeded the acceptable limits set by the Chinese Ministry of Environmental Protection. The LiPuDang Lake and the WuFangGang River were the most degraded areas. The studied parameters were correlated with urban, agricultural, industrial, and other major land use patterns. The results suggest that fecal contamination and nutrients, associated with certain land use practices, are the primary pollution factors in the Wujiang District. Detailed water quality monitoring and targeted management strategies are necessary to control pollution in Wujiang’s watersheds. View Full-Text
Keywords: water quality; nutrients; fecal contaminations; lakes and rivers; land use; Wujiang district water quality; nutrients; fecal contaminations; lakes and rivers; land use; Wujiang district
►▼ Show Figures 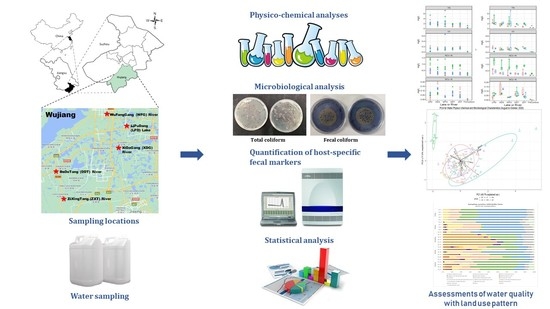