Different mitigation measures with vegetation have been proposed to sustainably manage rainwater, among which green roofs have demonstrated to be a valid solution in urbanized areas. Green roofs have gained interest also in Italy, but their spreading is generally based on application of ready-to-use packages, poorly tested in the specific climate conditions. A study was carried out to evaluate the green roof solution most suitable in the humid, subtropical climate context of Veneto Plain (north-eastern Italy) to reduce outflow volumes from building roofs into the urban drainage systems. Twelve different microcosm combinations of extensive green roof (three plant mixtures × two substrates × two storage/drainage layers) were tested and compared with gravel (considered as a conventional flat roof with gravel ballast). The tested drainage/storage layers were a preformed layer in recycled HDPE (PL) and an expanded perlite mineral layer (ML), and the growth medium layers were recycled brick substrate (RS) and volcanic substrate (VS). Three different mixtures of native plant species were transplanted: Sedum (SE), herbaceous perennial (HE), and suffruticose (SF). Results showed that all the green roof systems have a good ability to manage rainwater, with a retention ranging on average from 46.2% (SE-RS-PL microcosms) to 62.9% (SF-RS-ML microcosms) of the precipitation in the two-year period (September 2014–August 2016), against 15.4%, retained by gravel. Over the two-year period, the retained rainfall volumes were about 100% for all the light rainy events (<10 mm) and varied within a range of 48–95% for medium rainy events (≥10 and <25 mm) and 20–88% for heavy rainy events (≥25 mm), depending on rainfall depth and the antecedent weather period. The layer that gave the highest relative contribution to the stormwater retention was the vegetation layer, followed by the drainage/storage layers and then the substrate layer. In particular, SF plants decreased the outflows by 15.2% on average compared to SE, and ML layer retained more than 10% of precipitation compared to PL layer. At last, the analysis of variance showed that, within each layer, the more effective in water retention, able to generate less outflow volumes, was similarly suffruticose and herbaceous mixtures, the crushed bricks substrate, and the mineral drainage/storage layer. View Full-Text
Keywords: rainwater; natural water retention measures; flooding; green infrastructure rainwater; natural water retention measures; flooding; green infrastructure
►▼ Show Figures 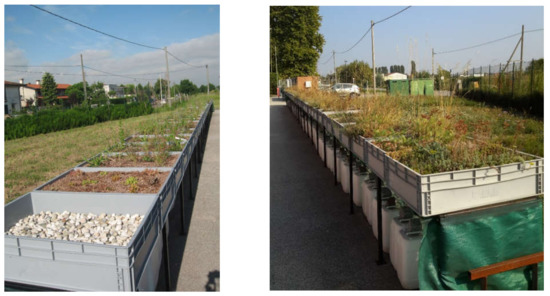