Use of Water Isotopes in Hydrological Processes
Previous Article in Journal

Can Soil Hydraulic Parameters be Estimated from the Stable Isotope Composition of Pore Water from a Single Soil Profile?

It is generally observed that precipitation is gradually depleted in 18O and 2H isotopes as elevation increases (‘altitude’ effect) or when moving inland from seacoasts (‘continental’ effect); the regionally accurate estimation of these large-scale effects is important in isotope hydrological or paleoclimatological applications. Nevertheless, seasonal and spatial differences should be considered. Stable isotope composition of monthly precipitation fallen between January 2016 and December 2018 was studied for selected stations situated along an elevation transect and a continental transect in order to assess the isotopic ‘altitude’ and ‘continental’ effects in modern precipitation across the Adriatic–Pannonian region. Isotopic characteristics argue that the main driver of the apparent vertical depletion of precipitation in heavy stable isotopes is different in summer (raindrop evaporation) and winter (condensation), although, there is no significant difference in the resulting ‘altitude’ effect. Specifically, an ‘altitude’ effect of −1.2‰/km for δ18O and −7.9‰/km for δ2H can be used in modern precipitation across the Adriatic–Pannonian region. Isotopic characteristics of monthly precipitation showed seasonally different patterns and suggest different isotope hydrometeorological regimes along the continental transect. While no significant decrease was found in δ18O data moving inland from the Adriatic from May to August of the year, a clear decreasing trend was found in precipitation fallen during the colder season of the year (October to March) up to a break at ~400 km inland from the Adriatic coast. The estimated mean isotopic ‘continental’ effect for the colder season precipitation is −2.4‰/100 km in δ18O and −20‰/100 km in δ2H. A prevailing influence of the Mediterranean moisture in the colder season is detected up to this breakpoint, while the break in the δ18O data probably reflects the mixture of moisture sources with different isotopic characteristics. A sharp drop in the d-excess (>3‰) at the break in precipitation δ18O trend likely indicates a sudden switch from the Mediterranean moisture domain to additional (mainly Atlantic) influence, while a gradual change in the d-excess values might suggest a gradual increase of the non-Mediterranean moisture contribution along the transect. View Full-Text
Keywords: stable isotopes; oxygen; hydrogen; d-excess; elevation effect; altitude effect; continental effect; Slovenia; Hungary stable isotopes; oxygen; hydrogen; d-excess; elevation effect; altitude effect; continental effect; Slovenia; Hungary
►▼ Show Figures 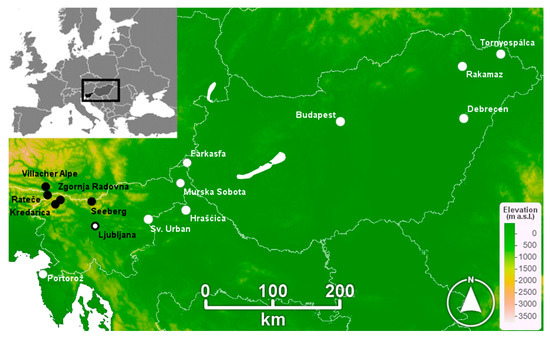