Hydrogeochemical Characterization of a Warm Spring System in a Carbonate Mountain Range of the Eastern Julian Alps, Slovenia
Previous Article in Journal

Millions of people in Uzbekistan, Turkmenistan, Tajikistan, and Kyrgyzstan are dependent on the freshwater supply of the Vakhsh River system. Sustainable management of the water resources of the Vakhsh River Basin (VRB) requires comprehensive assessment regarding future climate change and its implications for streamflow. In this study, we assessed the potential impacts of projected climate change scenarios on the streamflow in the VRB for two future periods (2022–2060 and 2061–2099). The probable changes in the regional climate system were assessed using the outputs of five global climate models (GCMs) under two representative concentration pathways (RCPs), RCP4.5 and RCP8.5. The probable streamflow was simulated using a semi-distributed hydrological model, namely the Soil and Water Assessment Tool (SWAT). Evidence of a significant increase in the annual average temperature by the end of the 21st century was found, ranging from 2.25 to 4.40 °C under RCP4.5 and from 4.40 to 6.60 °C under RCP8.5. The results of three GCMs indicated a decreasing tendency of annual average precipitation (from −1.7% to −16.0% under RCP4.5 and from −3.4% to −29.8% under RCP8.5). Under RCP8.5, two GCMs indicated an increase (from 2.3% to 5.3%) in the average annual precipitation by the end of 2099. The simulated results of the hydrological model reported an increasing tendency of average annual streamflow, from 17.5% to 52.3% under both RCPs, by the end of 2099. A shift in the peak flow month was also found, i.e., from July to June, under both RCPs. It is expected that in the future, median and high flows might increase, whereas low flow might decrease by the end of 2099. It is concluded that the future seasonal streamflow in the VRB are highly uncertain due to the probable alterations in temperature and precipitation. The findings of the present study could be useful for understanding the future hydrological behavior of the Vakhsh River, for the planning of sustainable regional irrigation systems in the downstream countries, i.e., Uzbekistan and Turkmenistan, and for the construction of hydropower plants in the upstream countries. View Full-Text
Keywords: climate change; hydrological model; streamflow; global climate models; Vakhsh River Basin climate change; hydrological model; streamflow; global climate models; Vakhsh River Basin
►▼ Show Figures 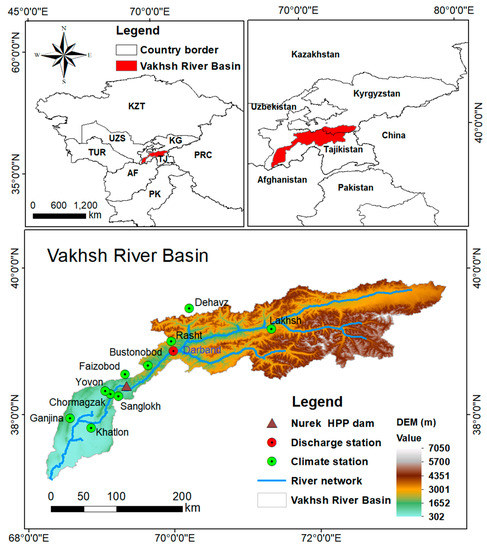