The role of recurves on top of seawalls in reducing overtopping has been previously shown but their influence in the distribution and magnitude of wave-induced pressures and forces on the seawall remains largely unexplored. This paper deals with the effects of different recurve geometries on the loads acting on the vertical wall. Three geometries with different arc lengths, or extremity angles (αe), were investigated in large-scale physical model tests with regular waves, resulting in a range of pulsating (non-breaking waves) to impulsive (breaking waves) conditions at the structure. As the waves hit the seawall, the up-rushing flow is deflected seawards by the recurve and eventually, re-enters the underlying water column and interacts with the next incoming wave. The re-entering water mass is, intuitively, expected to alter the incident waves but it was found that the recurve shape does not affect wave heights significantly. For purely pulsating conditions, the influence of αe on peak pressures and forces was also negligible. In marked contrast, the mean of the maximum impulsive pressure and force peaks increased, even by a factor of more than two, with the extremity angle. While there is no clear relation between the shape of the recurve and the mean peak pressures and forces, interestingly the mean of the 10% highest forces increases gradually with αe and this effect becomes more pronounced with increasing impact intensity. View Full-Text
Keywords: recurves; recurve geometry; vertical seawalls; wave loads and pressures; pulsating and impulsive conditions recurves; recurve geometry; vertical seawalls; wave loads and pressures; pulsating and impulsive conditions
►▼ Show Figures 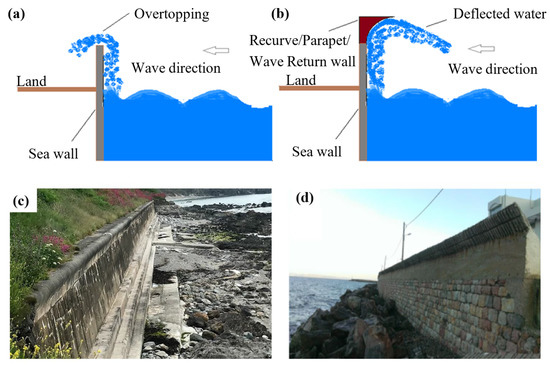