Effects of Light Intensity and Exposure Period on the Growth and Stress Responses of Two Cyanobacteria Species: Pseudanabaena galeata and Microcystis aeruginosa
Previous Article in Journal

Reconstructing Six Decades of Surface Temperatures at a Shallow Lake

The urban water cycle (UWC), which is composed of the water supply system (WSS) and urban drainage system (UDS), is a critical infrastructure required for the functioning of urban society. Considering the growing pollution and subsequent water scarcity caused by increasing urbanization and climate change, efficient UWC management is required to maintain resource sustainability and environmental protection. Cyber-physical systems (CPSs) provide a technological suite for the efficient management of critical systems. To exploit advantages of CPS for UWC, this paper proposes a CPS-based management framework enabling supervision, subsystem interoperability, and integrated optimization of UWC: (1) Firstly, clear definitions are provided to demonstrate that UWC systems can be considered as CPSs. (2) A multi-layer CPS-based supervision framework is presented afterwards, conceptually dividing the physical UWC and its digital counterpart into Supervision&Control, Scheduling, Digital Twin, and Water Users and Environment four layers. (3) The information flows that interact with each layer, as well as a key aspect of CSP operation, namely the interoperability among subsystems in the context of UWC, are also addressed. (4) To demonstrate advantages of supervision and interoperability of subsystems under the CPS framework, an integrated optimizer based on model predictive control (MPC) is applied and compared against the individual control of each system. A real case study of the WSS and UDS in Barcelona UWC is applied in order to validate the proposed approaches through virtual reality simulations based on MATLAB/SIMULIN and EPA-SWMM. View Full-Text
Keywords: UWC; CPS; supervision; interoperability; integrated optimization; MPC UWC; CPS; supervision; interoperability; integrated optimization; MPC
►▼ Show Figures 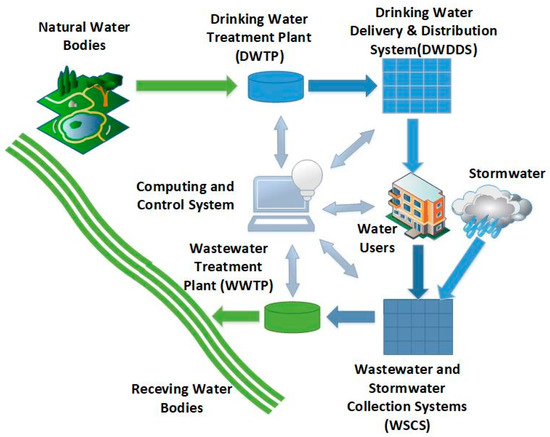