Reconstructing Six Decades of Surface Temperatures at a Shallow Lake

Lake surface water temperature (LSWT) plays a fundamental role in the lake energy budget. However, direct observations of LSWT require considerable effort for acquisition and hence are rare relative to a large number of lakes. In lakes where LSWT has not been covered sufficiently by in situ measurements, remote sensing and lake modeling can be used to produce a fine spatio-temporal record of LSWTs. In our study, the Moderate-Resolution Imaging Spectroradiometer (MODIS) LSWT was used to compare with in situ data at the overpass times over the six sites in Lake Chaohu, a large shallow lake in China. MODIS-derived LSWT reflected the variation of lake surface temperature well, with a correlation coefficient of 0.96 and a cool bias of 1.25 °C. The bias was modified by an “Upper Envelop” smoothing method and then employed to evaluate the general lake model (GLM) performance, a one-dimensional hydrodynamic model. The GLM simulations showed good performance compared with MODIS LSWT data at an interannual time scale. A 57-year record of simulated LSWT was hindcast by the well-calibrated GLM for Lake Chaohu. The results showed that LSWT decreased by 0.08 °C/year from 1960 to 1981 and then increased by 0.05 °C/year. These trends were most likely caused by a cooling effect of decreased surface incident solar radiation and a warming effect of reduced wind speed. Our study promoted the use of MODIS-derived LSWT as an alternative data source, and then combined with a numerical model for inland water surface temperature, and also further provided an understanding of climate warming effect on such a shallow eutrophic lake. Key points: (1) Moderate-Resolution Imaging Spectroradiometer (MODIS) lake water surface temperature (LSWT) was validated with real-time in situ data collected at Lake Chaohu with high accuracy; (2) MODIS LSWT was modified by the bias correction and employed to evaluate a one-dimensional lake model at interannual and intraannual scale; The LSWT hindcast by a well-calibrated model at Lake Chaohu decreased by 0.08 °C/year from 1960 to 1981 and increased by 0.05 °C/year from 1982 to 2016. View Full-Text
Keywords: lake water surface temperature; MODIS; lake modeling; climate change lake water surface temperature; MODIS; lake modeling; climate change
►▼ Show Figures 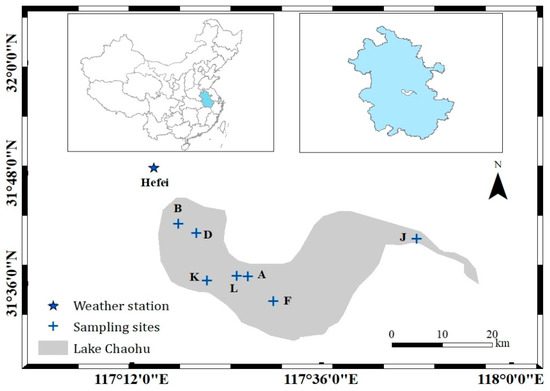