Headwaters’ Isotopic Signature as a Tracer of Stream Origins and Climatic Anomalies: Evidence from the Italian Alps in Summer 2018
Previous Article in Journal

The thinly populated Balkhash District of Kazakhstan’s Almaty Region lies in the lower reaches of the Ili-Balkhash basin, which is shared by China and Kazakhstan. The district is arid and heavily dependent on inflows of surface water, which are threatened by the effects of upstream population growth, economic development, and climate change. The quality of drinking water from centralized water systems and tube wells in nine villages of the district was analyzed, and the organoleptic properties of water from these sources was also assessed by an expert and via surveys of local residents. Although most samples met governmental standards for the absence of chemical impurities, high concentrations of mineralization, chlorides, boron, iron, and/or uranium were present in some well water samples. Levels of these pollutants were as much as 4-fold higher than governmental maxima and as much as 16-fold higher than concentrations reported previously in surface water. All centralized water samples met standards for absence of microbial contamination, but total microbial counts in some well water samples exceeded standards. Organoleptic standards were met by all the water from five villages, but centralized water from one village and well water from four villages failed to meet standards based on expert judgment. Residents were, for the most part, more satisfied with centralized rather than well water, but there was no obvious relationship between the failure of water to meet standards and the locations or populations of the settlements. This is the first comprehensive assessment of groundwater used for drinking in the lower Ili-Balkhash basin, and although it relies on a limited number of samples, it nevertheless provides evidence of potentially serious groundwater contamination in the Balkhash District. It is thus imperative that additional and more detailed studies be undertaken. View Full-Text
Keywords: water quality; rural Kazakhstan; Ili-Balkhash basin; organoleptic analysis of groundwater; risk identification and assessment water quality; rural Kazakhstan; Ili-Balkhash basin; organoleptic analysis of groundwater; risk identification and assessment
►▼ Show Figures 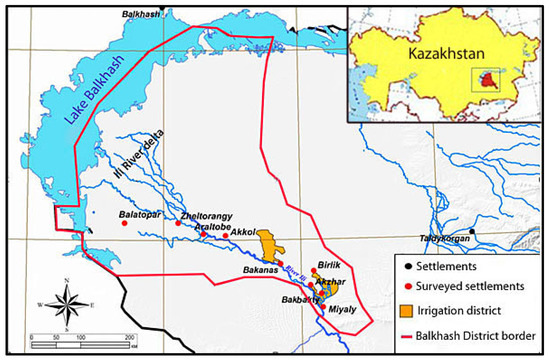