Can Soil Hydraulic Parameters be Estimated from the Stable Isotope Composition of Pore Water from a Single Soil Profile?
Next Article in Special Issue

Assessment of Anthropogenic Impact versus Climate Change on the Succession of the Diatom Community in Lugu Lake (Yunnan-Guizhou Plateau, China) Using the Sedimentary Record of Geochemical Elements

Headwaters’ Isotopic Signature as a Tracer of Stream Origins and Climatic Anomalies: Evidence from the Italian Alps in Summer 2018

Glaciers are shrinking due to global warming, resulting in a diminishing contribution of ice and snowmelt to headwaters and subsequent consequences to freshwater ecosystems. Within this context, we tested whether water-stable isotopes are spatio-temporal tracers of (i) water in high altitude periglacial environments, being the isotopic signature of surface water inherited from the snow/icemelt, groundwater, and rainfall; and (ii) regional (year-specific) meteorological conditions, being the isotopic signature of precipitations affected by air temperature, humidity and aqueous vapour origin, ascribing stable isotopes to the list of “essential climate variables″ (ECVs). To this end, we investigated the ionic and isotopic composition (δ18O and δ2H) of six high-altitude streams and one pond in the Italian Alps (Noce and Sarca basins) during the ablation season in 2018. Differences between habitat types (pond, kryal, rhithral, krenal) were detected. More negative values of δ18O and δ2H were recorded in the kryal and glacio-rhithral sites, dominated by ice and snowmelt, in early summer. Less negative values were recorded in these sites in late summer, as well as in the krenal sites, which were dominated by groundwater and rainfall inputs. The isotopic results also show that the complex alpine orography influences air masses and moisture, ultimately resulting in isotopic differences in the precipitations of neighboring but distinct catchments (Sarca and Noce basins). On average, less negative values were recorded in the Sarca basin, characterized by a higher contribution of precipitation of Mediterranean origin. In general, isotopic results of the entire water population appeared to be strongly influenced by the regional climatic anomaly of 2018, which was anomalously warm. Therefore, the study will provide additional information for the climate change debate, proposing water isotopes as ECVs for assessing change in a warmer future. View Full-Text
Keywords: water stable isotopes; Italian Alps; glacial system; climatic anomalies; river geochemistry water stable isotopes; Italian Alps; glacial system; climatic anomalies; river geochemistry
►▼ Show Figures 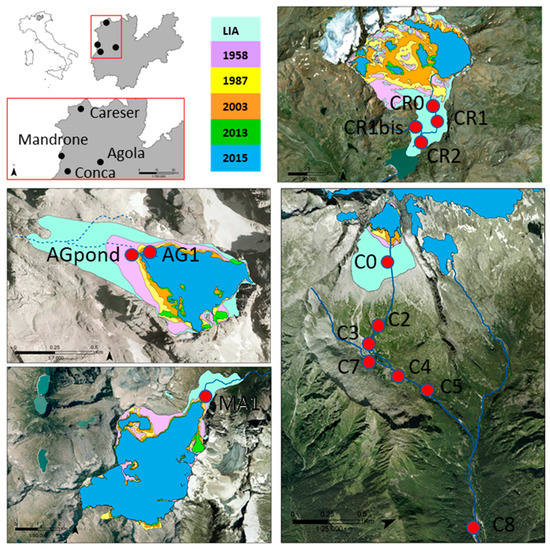