Roof-Harvested Rainwater Use in Household Agriculture: Contributions to the Sustainable Development Goals

Accidental leakage of hydrocarbons is a common subsurface contamination scenario. Once released, the hydrocarbons migrate until they reach the vicinity of the uppermost portion of the saturated zone, where it accumulates. Whenever the amplitude of the water table fluctuation is high, the light non-aqueous phase liquid (LNAPL) may be completely entrapped in the saturated zone. The entrapped LNAPL, comprised of multicomponent products (e.g., gasoline, jet fuel, diesel), is responsible for the release of benzene, toluene, ethylbenzene, and xylenes (BTEX) into the water, thus generating the dissolved phase plumes of these compounds. In order to estimate the time required for source-zone depletion, we developed an algorithm that calculates the mass loss of BTEX compounds in LNAPL over time. The simulations performed with our algorithm provided results akin to those observed in the field and demonstrated that the depletion rate will be more pronounced in regions with high LNAPL saturation. Further, the LNAPL depletion rate is mostly controlled by flow rate and is less sensible to the biodegradation rate in the aqueous phase. View Full-Text
Keywords: LNAPL depletion; dissolved plumes of BTEX compounds; jet fuel; numerical simulation of contaminant transport LNAPL depletion; dissolved plumes of BTEX compounds; jet fuel; numerical simulation of contaminant transport
►▼ Show Figures 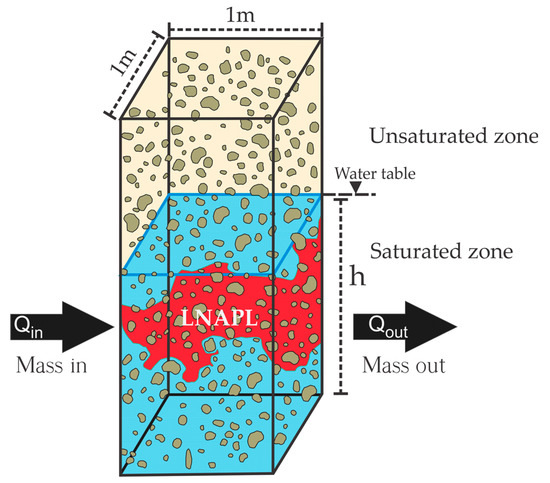