13 Years of Storms: An Analysis of the Effects of Storms on Lake Physics on the Atlantic Fringe of Europe
Previous Article in Journal

As a result of climate change, the frequency of glacial lake outburst floods (GLOF) is increasing in Chilean Patagonia. Yet, the impacts of the flood events on the physics and biology of fjords is still unknown. Current velocities, density, in-situ zooplankton samples, and volume backscatter (Sv) derived from an acoustic profiler were used to explore the response of circulation and zooplankton abundance in a Patagonian fjord to GLOF events in 2010 and 2014. Maximum Sv was found both during the GLOFs and in late winter to early spring of 2010 and the fall and summer of 2014. The increase in Sv in late winter and spring of 2010 corresponded to multiple zooplankton species found from in-situ net sampling. In addition, diel vertical migrations were found during this seasonal increase both qualitatively and in a spectral analysis. Concurrently with zooplankton increases, wind forcing produced a deepening of the pycnocline. Zooplankton abundance peaked in the fjord when the pycnocline depth deepened due to wind forcing and throughout the entire spring season, indicating that mixing conditions could favor secondary production. These results were corroborated by the 2014 data, which indicate that weather events in the region impact both fjord physics and ecology. View Full-Text
Keywords: zooplankton; GLOF; volume backscatter; Chilean Patagonia; diel vertical migration; sediment cascades zooplankton; GLOF; volume backscatter; Chilean Patagonia; diel vertical migration; sediment cascades
►▼ Show Figures 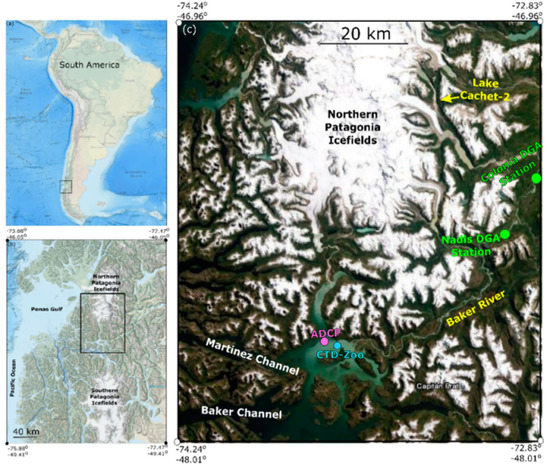