Flow Regime and Nutrient-Loading Trends from the Largest South European Watersheds: Implications for the Productivity of Mediterranean and Black Sea’s Coastal Areas

The Influence of Flow Regime on Ecological Quality, Bird Diversity, and Shellfish Fisheries in a Lowland Mediterranean River and Its Coastal Area

Designing environmental flows in lowland river sections and estuaries is a challenge for researchers and managers, given their complexity and their importance, both for nature conservation and economy. The Ebro River and its delta belong to a Mediterranean area with marked anthropogenic pressures. This study presents an assessment of the relationships between mean flows (discharges) computed at different time scales and (i) ecological quality based on fish populations in the lower Ebro, (ii) bird populations, and (iii) two shellfish fishery species of socioeconomic importance (prawn, or Penaeus kerathurus, and mantis shrimp, or Squilla mantis). Daily discharge data from 2000 to 2015 were used for analyses. Mean annual discharge was able to explain the variation in fish-based ecological quality, and model performance increased when aquatic vegetation was incorporated. Our results indicate that a good ecological status cannot be reached only through changes on discharge, and that habitat characteristics, such as the coverage of macrophytes, must be taken into account. In addition, among the different bird groups identified in our study area, predators were related to river discharge. This was likely due to its influence on available resources. Finally, prawn and mantis shrimp productivity were influenced up to a certain degree by discharge and physicochemical variables, as inputs from rivers constitute major sources of nutrients in oligotrophic environments such as the Mediterranean Sea. Such outcomes allowed revisiting the environmental flow regimes designed for the study area, which provides information for water management in this or in other similar Mediterranean zones. View Full-Text
Keywords: Ebro River; fish community; ecological quality; birds; fisheries; productivity; deltas Ebro River; fish community; ecological quality; birds; fisheries; productivity; deltas
►▼ Show Figures 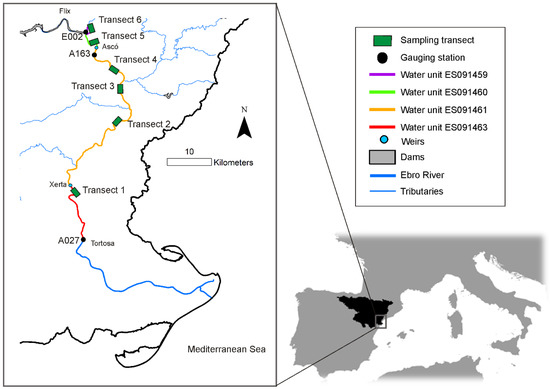