Hepatic Steatosis in a Bullhead (Cottus gobio) Population from a High-Mountain Lake (Carnic Alps): Adaptation to an Extreme Ecosystem?

Increased connectivity between coastal lagoons and the sea is expected to entail a greater proportion of marine species in the former. Chetumal Bay, estuary of the Hondo river into the Caribbean, had a limited access to the sea until the opening of the Zaragoza Canal. We sought changes in the fish community from 1999–2001 (just after an expansion of the canal) to 2015–2018. The same fishing gear was used, in the same localities, during all seasons. Total fish abundance and mean local richness decreased, although total abundance increased in the polyhaline zone. Diversity was greater in the oligohaline zone in 1999–2001, and in the mesohaline zone in 2015–2018. Three guilds were absent in 2015–2018: Medium-sized herbivores, large piscivores, and medium-sized planktivores. Abundance of small benthivores decreased by decade; medium-sized piscivores and small planktivores became more abundant in 2015–2018 in the polyhaline zone. These changes may be due to the opening of the channel, but illegal fishing outside the bay may explain the decrease in juveniles of large piscivores, and erosion in the innermost part may be destroying important habitats. Our findings can be a reference for similar situations, as coastal development and climate change interact and affect tropical estuaries. View Full-Text
Keywords: ichthyofauna; trophic guilds; salinity-tolerance; connectivity; Chetumal Bay; Mexico ichthyofauna; trophic guilds; salinity-tolerance; connectivity; Chetumal Bay; Mexico
►▼ Show Figures 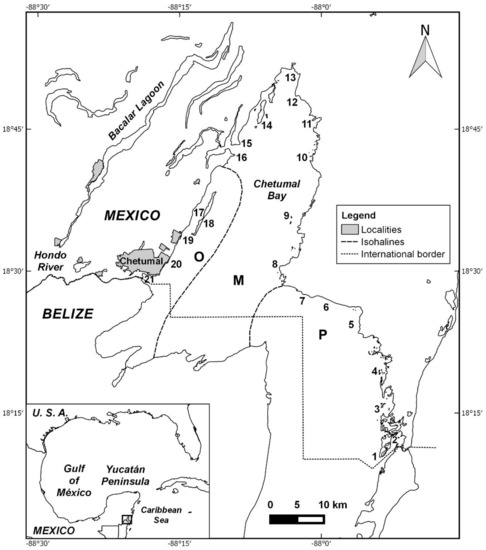 Schmitter-Soto, J.J.; Herrera-Pavón, R.L. Changes in the Fish Community of a Western Caribbean Estuary after the Expansion of an Artificial Channel to the Sea. Water 2019, 11, 2582.


Schmitter-Soto JJ, Herrera-Pavón RL. Changes in the Fish Community of a Western Caribbean Estuary after the Expansion of an Artificial Channel to the Sea. Water. 2019; 11(12):2582.


Schmitter-Soto, Juan J.; Herrera-Pavón, Roberto L. 2019. "Changes in the Fish Community of a Western Caribbean Estuary after the Expansion of an Artificial Channel to the Sea" Water 11, no. 12: 2582.