Multi-Objective Joint Optimal Operation of Reservoir System and Analysis of Objectives Competition Mechanism: A Case Study in the Upper Reach of the Yangtze River
Previous Article in Journal

Rural Piped-Water Enterprises in Cambodia: A Pathway to Women’s Empowerment?

Soil architecture exerts an important control on soil hydraulic properties and hydrological responses. However, the knowledge of hydraulic properties related to soil architecture is limited. The objective of this study was to investigate the influences of soil architecture on soil physical and hydraulic properties and explore their implications for runoff generation in a small agricultural watershed in the Three Gorges Reservoir Area (TGRA) of southern China. Six types of soil architecture were selected, including shallow loam sandy soil in grassland (SLSG) and shallow loam sandy soil in cropland (SLSC) on the shoulder; shallow sandy loam in grassland (SSLG) and shallow sandy loam in cropland (SSLC) on the backslope; and deep sandy loam in grassland (DSLG) and deep sandy loam in cropland (DSLC) on the footslope. The results showed that saturated hydraulic conductivity (Ksat) was significantly higher in shallow loamy sand soil under grasslands (8.57 cm h−1) than under croplands (7.39 cm h−1) at the topsoil layer. Total porosity was highest for DSLC and lowest for SSLG, averaged across all depths. The proportion of macropores under SLSG was increased by 60% compared with under DSLC, which potentially enhanced water infiltration and decreased surface runoff. The landscape location effect showed that at the shoulder, Ksat values were 20% and 47% higher than values at the backslope and footslope, respectively. It was inferred by comparing Ksat values with 30 min maximum rainfall intensity at the watershed, that surface runoff would be generated in SSLC, DSLG, and DSLC sites by storms, but that no overland flow is generated in both sites at the shoulder and SSLG. The significantly higher Ksat under grasslands in comparison to croplands at the backslope indicated that planting grasses would increase infiltration capacity and mitigate runoff generation during storm events. The findings demonstrated that croplands in footslope positions might be hydrologically sensitive areas in this small agricultural watershed. View Full-Text
Keywords: soil architecture; management; water retention; hydraulic properties; runoff generation soil architecture; management; water retention; hydraulic properties; runoff generation
►▼ Show Figures 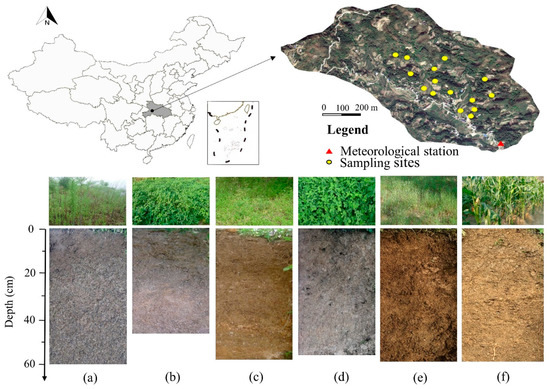