Drought Characteristics and Its Response to the Global Climate Variability in the Yangtze River Basin, China

The frequent occurrence of drought events in humid and semi-humid regions is closely related to the global climate variability (GCV). In this study, the Standard Precipitation Evapotranspiration Index (SPEI) was taken as an index to investigate the drought in the Yangtze River Basin (YRB), a typical humid and semi-humid region in China. Furthermore, nine GCV indices, such as North Atlantic Oscillation (NAO) were taken to characterize the GCV. Correlation analysis and a joint probability distribution model were used to explore the relationship between the drought events and the GCV. The results demonstrated that there were six significant spatiotemporal modes revealed by SPEI3 (i.e., seasonal drought), which were consistent with the distribution of the main sub basins in the YRB, indicating a heterogeneity of drought regime. However, the SPEI12 (i.e., annual drought) can only reveal five modes. Precipitation Indices and El Niño/Southern Oscillation (ENSO) Indices were more closely related to the drought events. A causal relationship existed between ENSO precipitation index (ESPI), NAO, East Central Tropical Pacific Sea Surface Temperature (Nino3.4) and Northern Oscillation Index (NOI) and drought in the YRB, respectively. Drought events were most sensitive to the low NAO and high NOI events. This study shows a great significance for the understanding of spatiotemporal characteristics of meteorological drought and will provide a reference for the further formulation of water resources policy and the prevention of drought disasters. View Full-Text
Keywords: SPEI; the GCV; joint probability distribution; the Yangtze River basin; drought SPEI; the GCV; joint probability distribution; the Yangtze River basin; drought
►▼ Show Figures 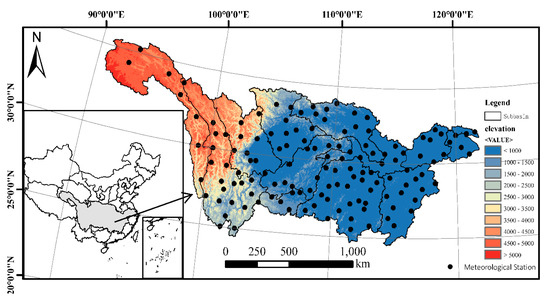