Drought Characteristics and Its Response to the Global Climate Variability in the Yangtze River Basin, China
Next Article in Special Issue

Riverbank filtration (RBF) systems were installed in four rural villages along a 64 km stretch of the upper Krishna River in southern India; with each one designed to supply approximately 2500 people. Site selection criteria included hydrogeological suitability, land availability and access, proximity to villages and their population sizes, and electric power supply. Water samples were collected from the river and the RBF wells over more than one year (November 2015 to December 2017) and were analyzed for Escherichia coli bacteria, major ions, and a range of other physicochemical and chemical parameters. The shallow groundwater at the study sites was also sampled, but less frequently. The hydrogeology of the four RBF systems was described in terms of bore-log data, mixing of river and groundwater, pumping test data, and vertical water column profiling. E. coli removal percentages of >99.9% were observed immediately before and during the monsoon, when E. coli concentrations in the river were the highest. The results provide evidence that RBF installations are challenging but possible under the climate and hydrogeologic conditions prevailing in this part of southern India. Specifically, when installing RBF wells in the study, area one needs to balance the well depth and set-back distance from the river against the limited extent of alluvial deposits. The viability of RBF systems as a domestic water source is also influenced by other factors that are not limited to southern India, including surface water and groundwater salinity, agricultural practices surrounding RBF wells, and the reliability of the power grid. View Full-Text
Keywords: riverbank filtration (RBF); Krishna River; southern India; water treatment; water quality; salinity riverbank filtration (RBF); Krishna River; southern India; water treatment; water quality; salinity
►▼ Show Figures 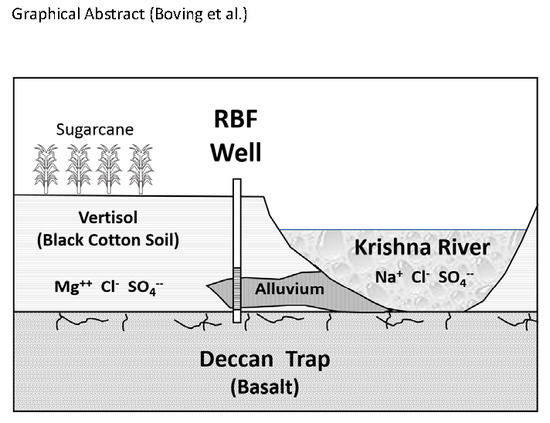