Flooding has the ability to severely reduce the capacity of a transportation network. The closure of even a single bridge, which often acts as a critical link in transportation networks, can have a severe impact on the entire network. This impact can lead to significant economic costs resulting from increased travel distances for drivers. Despite the significance of these costs, however, notably few studies have been conducted to determine the societal economic cost that would be incurred due to bridge closures. One possible reason for the lack of studies investigating bridge closures due to flooding could stem from the difficultly in collecting data. To address this issue, the methodology presented in this paper uses modeling and data resources that are available for major cities in most developed countries, including those in South Korea. We evaluate the economic impact of the bridge closures using the new administrative capital of North Gyeongsang Province, South Korea as a case study. Scenarios for the closure of bridges are derived from channel surveys and hydraulic analyses. These methods are used to overcome a lack of adequate data on historical floods in the new city. Traffic is forecasted to estimate the number of road users that would be forced to take detours due to inundated bridges. Contrasting travel distances when bridges are and are not operational, economic costs incurred by bridge closures due to flooding are estimated. The results indicated that bridge closures would result in an economic cost of 1563 USD to 44,180 USD per day, depending on how many bridges are closed and how many people are living in the new city. The estimates from this study will act as guidelines for identifying cost-effective mitigation and preparedness strategies aimed at reducing the frequency and impact of bridge closures due to flooding. View Full-Text
Keywords: disaster management; economic impact analysis; flooding; resilience disaster management; economic impact analysis; flooding; resilience
►▼ Show Figures 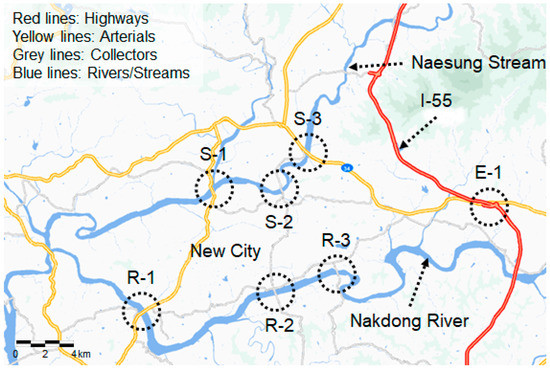