Irrigation and fertilization both affect the water cycle in agricultural ecosystems. It is difficult to quantify root water uptake (RWU) which varies with crop development and seasons. In this study, a Bayesian mixing model (MixSIAR) coupling with dual stable isotopes (D and 18O) was used to quantify RWU patterns for winter wheat under different irrigation and fertilization treatments between 2014 and 2015 in Beijing, China. The main RWU depth during the greening-jointing, jointing-heading, heading-filling, and filling-harvest stages was 0–20 cm, 20–70 cm, 0–20 cm, and 20–70 cm, respectively, which showed water uptake proportions of 67.0%, 42.0%, 38.7%, and 34.9%, respectively. Significant differences in RWU patterns appeared between the 2014 and 2015 seasons. The main RWU depth increased gradually from 0–20 cm at the greening-jointing stage to 20–70 cm at the jointing-heading stage and 70–150 cm during the heading to harvest period in 2014. However, winter wheat primarily took up soil water from the 0–70 cm layer in 2015. The average water uptake proportion in the top layer (0–20 cm) in 2015 (42.6%) was remarkably higher than that in 2014 (28.7%). There was a significantly negative relationship (p < 0.01) between the water uptake proportion and the proportion of root length at the filling-harvest stage in 2014, while no significant correlation (p > 0.05) was found in 2015. Variable distributions of root characteristics and soil moisture induced by different irrigation and fertilization comprehensively affected the RWU profile, particularly under severe drought environments in 2015. Treatments with fertilization of 105 kg hm−2 N or irrigation of 20 mm during the greening-jointing stage significantly promoted water uptake contribution in the 70–150 cm (32.2%) and 150–200 cm (23.5%) layers at the jointing-heading stage in 2015, while other treatments had a shallow dominant RWU depth (0–20 cm). The planned wetting layer should be kept within the main RWU depth of 0–70 cm for improving irrigation water use efficiency. View Full-Text
Keywords: root water uptake; dual stable isotopes; MixSIAR model; irrigation and fertilization treatments; winter wheat root water uptake; dual stable isotopes; MixSIAR model; irrigation and fertilization treatments; winter wheat
►▼ Show Figures 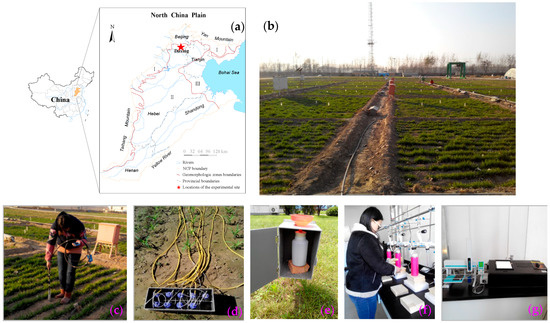