Monitoring of Air Pollution by Moss Bags around an Oil Refinery: A Critical Evaluation over 16 Years

The present study analyzes the results of a biomonitoring campaign, carried out by means of Hypnum cupressiforme Hedw. moss bags around an oil refinery, located in the southwestern part of Sardinia island (Italy). This work focuses mainly on the effects of rainfall and distance from the source of contamination on the content of 14 trace elements measured over 16 years. In addition, to point out any increasing or decreasing trends, as well as any peak in presence of airborne pollutants in the area, annual elements’ concentration values are plotted and discussed. Coefficients of variation were also calculated on accumulation values in order to evaluate stability of measurements across the years and to evaluate if similar exposure conditions, i.e., humidity and distance from contamination source, resulted in more uniform accumulation values. In conclusion, (i) the vicinity of the source of contamination as well as rainfall influenced element content in the biomonitor in the case study differently, depending on the considered element and on the exposure condition, (ii) H. cupressiforme moss bags provided relatively stable measurements during the 16-year time frame (observed variations in elements content can be attributed to environmental inputs in the area), (iii) similar conditions of exposure determined less variable accumulation values. View Full-Text
Keywords: air pollution; biomonitoring; airborne pollutants; bryophytes air pollution; biomonitoring; airborne pollutants; bryophytes
►▼ Show Figures 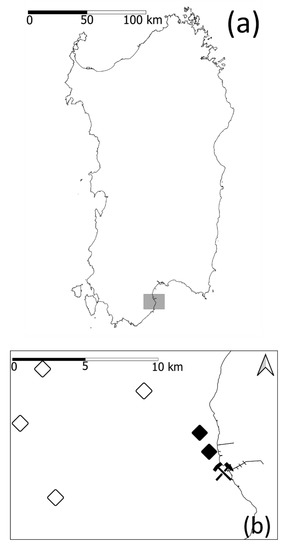