Empirical evidence suggests that variations in climate affect the net primary productivity (NPP) across sandy areas over time. However, little is known about the relative impacts of climate change on NPP with global warming of 1.5 and 2.0 °C (GW_1.5 °C_2.0 °C) relative to pre-industrial levels. Here, we used a new set of climate simulations from four Inter-Sectoral Impact Model Intercomparison Project (ISI-MIP 2b) datasets, modified the Carnegie-Ames-Stanford approach (CASA) model and assessed the spatio-temporal variation in NPP in sandy areas of northern China (SAONC). Compared with the reference period (RP, 1986–2005), the NPP variation under four emission scenarios showed clear rising trends and increased most significantly under RCP8.5 with an annual average increase of 2.34 g C/m2. The estimated annual NPP under global warming of 1.5 °C (GW_1.5 °C) increased by 14.17, 10.72, 8.57, and 26.68% in different emission scenarios, and under global warming of 2.0 °C (GW_2.0 °C) it increased by 20.87, 24.01, 29.31, and 39.94%, respectively. In terms of seasonal change, the NPP value under the four emission scenarios changed most significantly in the summer relative to RP, exhibiting a growth of 16.48%. Temperature changes (p > 0.614) had a greater impact on NPP growth than precipitation (p > 0.017), but solar radiation showed a certain negative impact in the middle- and low-latitude regions. NPP showed an increasing trend that changed from the southeast to the central and western regions at GW_1.5 to GW_2.0 °C. NPP was consistent with the spatial change in climate factors and had a promoting role in high latitudes in SAONC, but it was characterized by a certain inhibitory effect at middle and low latitudes in SAONC. The uncertainty of NPP under the four models ranged from 16.29 to 26.52%. Our findings suggest that the impact of GW_1.5 °C is relatively high compared with the current conditions, whereas GW_2.0 °C implies significantly lower projected NPP growth in all areas. View Full-Text
Keywords: net primary productivity; global warming; CASA model; sandy areas; northern China net primary productivity; global warming; CASA model; sandy areas; northern China
►▼ Show Figures 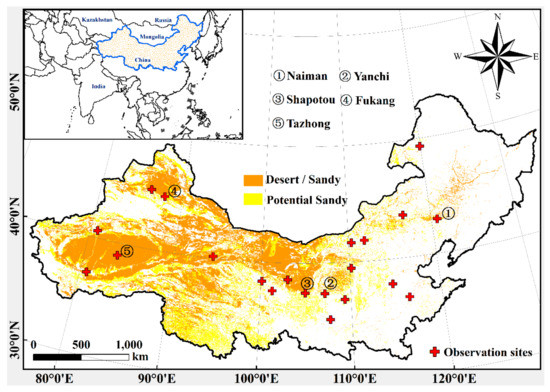