Vertebrate Genome Evolution in the Light of Fish Cytogenomics and rDNAomics

Transitions from sexual to asexual reproduction are often associated with polyploidy and increased chromosomal plasticity in asexuals. We investigated chromosomes in the freshwater ostracod species Eucypris virens (Jurine, 1820), where sexual, asexual and mixed populations can be found. Our initial karyotyping of multiple populations from Europe and North Africa, both sexual and asexual, revealed a striking variability in chromosome numbers. This would suggest that chromosomal changes are likely to be accelerated in asexuals because the constraints of meiosis are removed. Hence, we employed comparative genomic hybridization (CGH) within and among sexual and asexual populations to get insights into E. virens genome arrangements. CGH disclosed substantial genomic imbalances among the populations analyzed, and three patterns of genome arrangement between these populations: 1. Only putative ribosomal DNA (rDNA)-bearing regions were conserved in the two populations compared indicating a high sequence divergence between these populations. This pattern is comparable with our findings at the interspecies level of comparison; 2. Chromosomal regions were shared by both populations to a varying extent with a distinct copy number variation in pericentromeric and presumable rDNA-bearing regions. This indicates a different rate of evolution in repetitive sequences; 3. A mosaic pattern of distribution of genomic material that can be explained as non-reciprocal genetic introgression and evidence of a hybrid origin of these individuals. We show an overall increased chromosomal dynamics in E. virens that is complementary with available phylogenetic and population genetic data reporting highly differentiated diploid sexual and asexual lineages with a wide variety of genetic backgrounds. View Full-Text
Keywords: freshwater ostracods; asexuality; reproductive modes; geographical parthenogenesis; comparative genomic hybridization; chromosome numbers; karyotype freshwater ostracods; asexuality; reproductive modes; geographical parthenogenesis; comparative genomic hybridization; chromosome numbers; karyotype
►▼ Show Figures 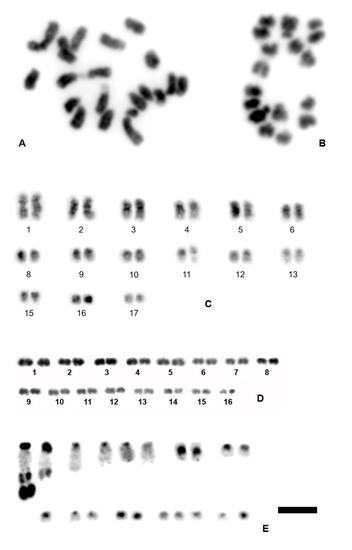