Phosphate (Pi) deficiency reduces nodule formation and development in different legume species including common bean. Despite significant progress in the understanding of the genetic responses underlying the adaptation of nodules to Pi deficiency, it is still unclear whether this nutritional deficiency interferes with the molecular dialogue between legumes and rhizobia. If so, what part of the molecular dialogue is impaired? In this study, we provide evidence demonstrating that Pi deficiency negatively affects critical early molecular and physiological responses that are required for a successful symbiosis between common bean and rhizobia. We demonstrated that the infection thread formation and the expression of PvNSP2, PvNIN, and PvFLOT2, which are genes controlling the nodulation process were significantly reduced in Pi-deficient common bean seedlings. In addition, whole-genome transcriptional analysis revealed that the expression of hormones-related genes is compromised in Pi-deficient seedlings inoculated with rhizobia. Moreover, we showed that regardless of the presence or absence of rhizobia, the expression of PvRIC1 and PvRIC2, two genes participating in the autoregulation of nodule numbers, was higher in Pi-deficient seedlings compared to control seedlings. The data presented in this study provides a mechanistic model to better understand how Pi deficiency impacts the early steps of the symbiosis between common bean and rhizobia. View Full-Text
Keywords: phosphorus deficiency; common bean; rhizobia; molecular dialog; symbiosis; gene transcription phosphorus deficiency; common bean; rhizobia; molecular dialog; symbiosis; gene transcription
►▼ Show Figures 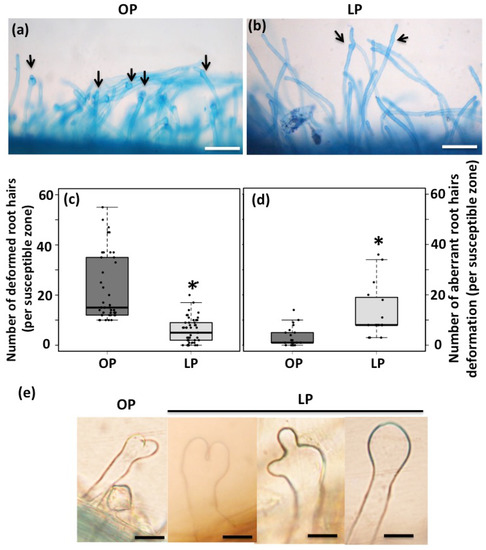