Assessment of genetic diversity among different varieties helps to improve desired characteristics of crops, including disease resistance, early maturity, high yield, and resistance to drought. Molecular markers are one of the most effective tools for discovering genetic diversity that can increase reproductive efficiency. Simple sequence repeats (SSRs), which are codominant markers, are preferred for the determination of genetic diversity because they are highly polymorphic, multi-allelic, highly reproducible, and have good genome coverage. This study aimed to determine the genetic diversity of 40 common bean (Phaseolus vulgaris L.) landraces collected from the Ispir district located in the Northeast Anatolia region of Türkiye and five commercial varieties using SSR markers. The Twenty-seven SSR markers produced a total of 142 polymorphic bands, ranging from 2 (GATS91 and PVTT001) to 12 (BM153) alleles per marker, with an average number of 5.26 alleles. The gene diversity per marker varied between 0.37 and 0.87 for BM053 and BM153 markers, respectively. When heterozygous individuals are calculated proportional to the population, the heterozygosity ranged from 0.00 to 1.00, with an average of 0.30. The expected heterozygosity of the SSR locus ranged from 0.37 (BM053) to 0.88 (BM153), with an average of 0.69. Nei’s gene diversity scored an average of 0.69. The polymorphic information content (PIC) values of SSR markers varied from 0.33 (BM053) to 0.86 (BM153), with an average of 0.63 per locus. The greatest genetic distance (0.83) was between lines 49, 50, 53, and cultivar Karacaşehir-90, while the shortest (0.08) was between lines 6 and 26. In cluster analysis using Nei’s genetic distance, 45 common bean genotypes were divided into three groups and very little relationship was found between the genotypes and the geographical distances. In genetic structure analysis, three subgroups were formed, including local landraces and commercial varieties. The result confirmed that the rich diversity existing in Ispir bean landraces could be used as a genetic resource in designing breeding programs and may also contribute to Türkiye bean breeding programs. View Full-Text
Keywords: bean breeding; genetic diversity; molecular markers; structure bean breeding; genetic diversity; molecular markers; structure
►▼ Show Figures 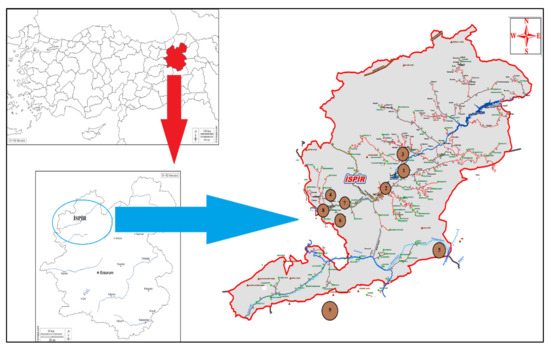