The training machine learning algorithm from an imbalanced data set is an inherently challenging task. It becomes more demanding with limited samples but with a massive number of features (high dimensionality). The high dimensional and imbalanced data set has posed severe challenges in many real-world applications, such as biomedical data sets. Numerous researchers investigated either imbalanced class or high dimensional data sets and came up with various methods. Nonetheless, few approaches reported in the literature have addressed the intersection of the high dimensional and imbalanced class problem due to their complicated interactions. Lately, feature selection has become a well-known technique that has been used to overcome this problem by selecting discriminative features that represent minority and majority class. This paper proposes a new method called Robust Correlation Based Redundancy and Binary Grasshopper Optimization Algorithm (rCBR-BGOA); rCBR-BGOA has employed an ensemble of multi-filters coupled with the Correlation-Based Redundancy method to select optimal feature subsets. A binary Grasshopper optimisation algorithm (BGOA) is used to construct the feature selection process as an optimisation problem to select the best (near-optimal) combination of features from the majority and minority class. The obtained results, supported by the proper statistical analysis, indicate that rCBR-BGOA can improve the classification performance for high dimensional and imbalanced datasets in terms of G-mean and the Area Under the Curve (AUC) performance metrics. View Full-Text
Keywords: multi-filter; high dimensionality; class-imbalanced dataset; Grasshopper optimisation algorithm multi-filter; high dimensionality; class-imbalanced dataset; Grasshopper optimisation algorithm
►▼ Show Figures 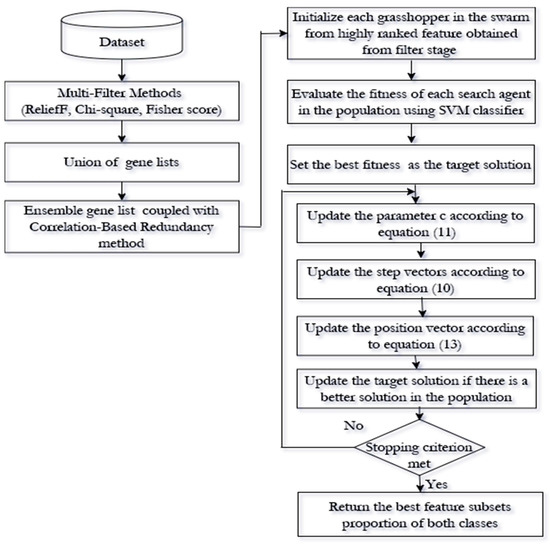