Experimental Evolution of Legume Symbionts: What Have We Learnt?

Shigella flexneri is the principal cause of bacillary dysentery, contributing significantly to the global burden of diarrheal disease. The appearance and increase in the multi-drug resistance among Shigella strains, necessitates further genetic studies and development of improved/new drugs against the pathogen. The presence of an abundance of hypothetical proteins in the genome and how little is known about them, make them interesting genetic targets. The present study aims to carry out characterization of the hypothetical proteins present in the genome of a newly emerged serotype of S. flexneri (strain Y394), toward their novel regulatory functions using various bioinformatics databases/tools. Analysis of the genome sequence rendered 4170 proteins, out of which 721 proteins were annotated as hypothetical proteins (HPs) with no known function. The amino acid sequences of these HPs were evaluated using a combination of latest bioinformatics tools based on homology search against functionally identified proteins. Functional domains were considered as the basis to infer the biological functions of HPs in this case and the annotation helped in assigning various classes to the proteins such as signal transducers, lipoproteins, enzymes, membrane proteins, transporters, virulence, and binding proteins. This study contributes to a better understanding of growth, survival, and disease mechanism at molecular level and provides potential new targets for designing drugs against Shigella infection. View Full-Text
Keywords: hypothetical proteins; Shigella flexneri; functional elucidation; protein function; virulence; vaccine development hypothetical proteins; Shigella flexneri; functional elucidation; protein function; virulence; vaccine development
►▼ Show Figures 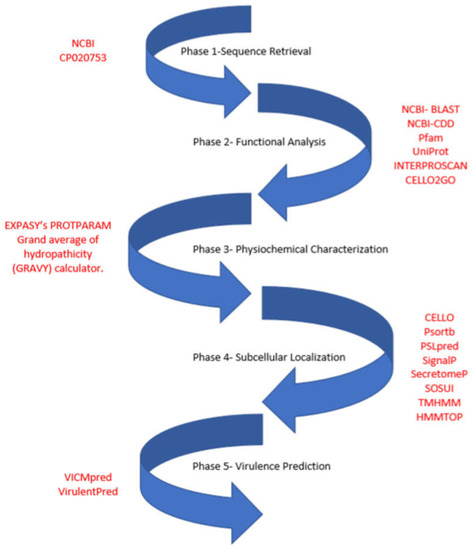