Current and Emerging Methods for the Synthesis of Single-Stranded DNA

Scrotal hernias (SH) are common congenital defects in commercial pigs, characterized by the presence of abdominal contents in the scrotal sac, leading to considerable production and animal welfare losses. Since the etiology of SH remains obscure, we aimed to identify the biological and genetic mechanisms involved in its occurrence through the whole transcriptome analysis of SH affected and unaffected pigs’ inguinal rings. From the 22,452 genes annotated in the pig reference genome, 13,498 were expressed in the inguinal canal tissue. Of those, 703 genes were differentially expressed (DE, FDR < 0.05) between the two groups analyzed being, respectively, 209 genes upregulated and 494 downregulated in the SH-affected group. Thirty-seven significantly overrepresented GO terms related to SH were enriched, and the most relevant biological processes were muscular system, cell differentiation, sarcome reorganization, and myofibril assembly. The calcium signaling, hypertrophic cardiomyopathy, dilated cardiomyopathy, and cardiac muscle contraction were the major pathways possibly involved in the occurrence of the scrotal hernias. The expression profile of the DE genes was associated with the reduction of smooth muscle differentiation, followed by low calcium content in the cell, which could lead to a decreased apoptosis ratio and diminished muscle contraction of the inguinal canal region. We have demonstrated that genes involved with musculature are closely linked to the physiological imbalance predisposing to scrotal hernia. According to our study, the genes MYBPC1, BOK, SLC25A4, SLC8A3, DES, TPM2, MAP1CL3C, and FGF1 were considered strong candidates for future evaluation. View Full-Text
Keywords: transcriptome; congenital disease; differentially expressed genes transcriptome; congenital disease; differentially expressed genes
►▼ Show Figures 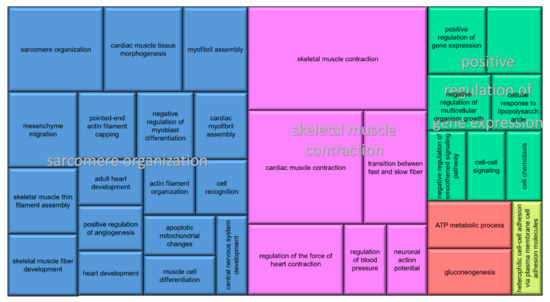