Loss-of-function variants in the NSDHL gene have been associated with epidermal nevi in humans with congenital hemidysplasia, ichthyosiform nevi, and limb defects (CHILD) syndrome and in companion animals. The NSDHL gene codes for the NAD(P)-dependent steroid dehydrogenase-like protein, which is involved in cholesterol biosynthesis. In this study, a female Chihuahua cross with a clinical and histological phenotype consistent with progressive epidermal nevi is presented. All exons of the NSDHL candidate gene were amplified by PCR and analyzed by Sanger sequencing. A heterozygous frameshift variant, c.718_722delGAACA, was identified in the affected dog. In lesional skin, the vast majority of NSDHL transcripts lacked the five deleted bases. The variant is predicted to produce a premature stop codon truncating 34% of the encoded protein, p.Glu240Profs*17. The mutant allele was absent from 22 additionally genotyped Chihuahuas, as well as from 647 control dogs of diverse breeds and eight wolves. The available experimental data together with current knowledge about NSDHL variants and their functional impact in humans, dogs, and other species prompted us to classify this variant as pathogenic according to the ACMG guidelines that were previously established for human sequence variants. Therefore, we propose the c.718_722delGAACA variant as causative variant for the observed skin lesions in this dog. View Full-Text
Keywords: Canis lupus familiaris; animal model; genodermatosis; dermatology; skin; CHILD syndrome; ILVEN; epidermal nevus; precision medicine Canis lupus familiaris; animal model; genodermatosis; dermatology; skin; CHILD syndrome; ILVEN; epidermal nevus; precision medicine
►▼ Show Figures 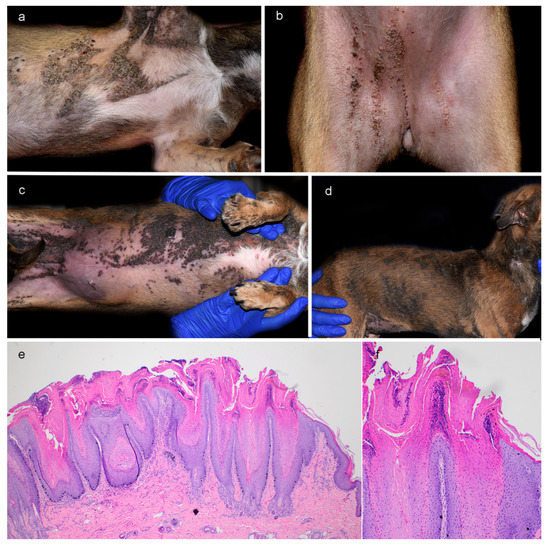