Chemosensory proteins (CSP) are a class of acidic soluble proteins which have various functions in chemoreception, resistance and immunity, but we still have very little knowledge on this gene family in fig wasps, a peculiar insects group (Hymenoptera, Chalcidoidea) that shelter in the fig syconia of Ficus trees. Here, we made the first comprehensive analysis of CSP gene family in the 11 fig wasps at whole-genome level. We manually annotated 104 CSP genes in the genomes of the 11 fig wasps, comprehensively analyzed them in gene characteristics, conserved cysteine patterns, motif orders, phylogeny, genome distribution, gene tandem duplication, and expansion and contraction patterns of the gene family. We also approximately predicted the gene expression by codon adaptation index analysis. Our study shows that the CSP gene family is conserved in the 11 fig wasps; the CSP gene numbers in pollinating fig wasps are less than in non-pollinating fig wasps, which may be due to their longer history of adaptation to fig syconia; the expansion of CSP gene in two non-pollinating fig wasps, Philotrypesis tridentata and Sycophaga agraensis, may be a species-specific phenomenon. These results provide us with useful information for understanding the evolution of the CSP gene family of insects in diverse living environments. View Full-Text
Keywords: chemosensory proteins; fig wasps; whole-genome level chemosensory proteins; fig wasps; whole-genome level
►▼ Show Figures 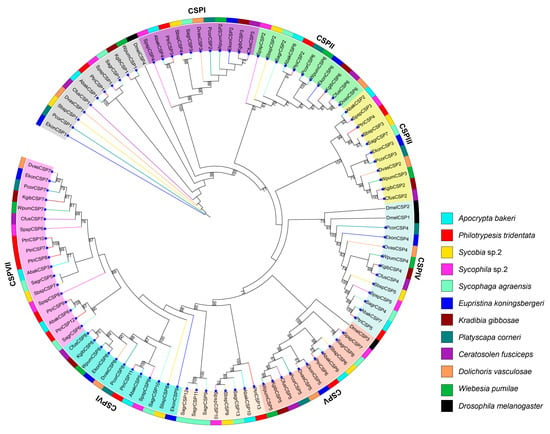