Mammals have variable numbers (1300–2000) of transcription factors (TFs), but the reasons for this large variation are unclear. To investigate general TF patterns, we de novo identified 156,906 TFs from 96 mammalian species. We identified more than 500 human isolated TFs that are rarely reported in human TF-to-TF networks. Mutations in the genes of these TFs were less lethal than those of connected TFs. Consequently, these isolated TFs are more tolerant of changes and have become unique during speciation. They may also serve as a source of variation for TF evolution. Reconciliation of TF-family phylogenetic trees with a mammalian species tree revealed an average of 37.8% TF gains and 15.0% TF losses over 177 million years, which implies that isolated TFs are pervasive in mammals. Compared with non-TF interacting genes, TF-interacting genes have unique TF profiles and have higher expression levels in mice than in humans. Different expression levels of the same TF-interacting gene contribute to species-specific phenotypes. Formation and loss of isolated TFs enabling unique TF profiles may provide variable switches that adjust divergent expression profiles of target genes to generate species-specific phenotypes, thereby making species unique. View Full-Text
Keywords: transcription factor; regulatory network; mammal transcription factor; regulatory network; mammal
►▼ Show Figures 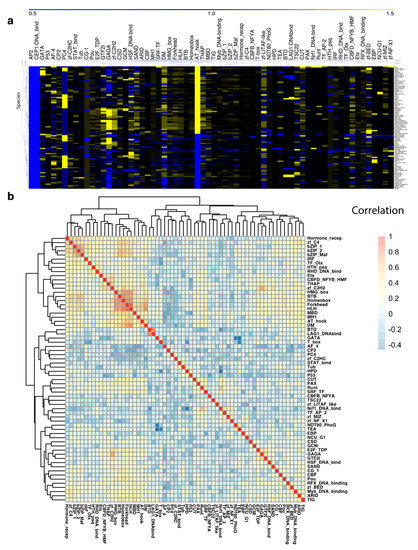