Angiopoietin-1 (Ang-1) is an important proangiogenic factor also involved in the maintenance of endothelial-barrier integrity. The small GTPase Rap1 is involved in the regulation of adherens junctions through VE-cadherin-mediated adhesion, and in endothelial permeability. While many studies established that Rap1 activation is critical for endothelial cell–cell adhesions, its roles in the antipermeability effects of Ang-1 are ill-defined. Thus, we determined the contribution of Rap1 to Ang-1-stimulated angiogenic effects on endothelial cells (ECs). We found that Rap1 is activated following Ang-1 stimulation and is required for the antipermeability effects of Ang-1 on EC monolayers. Our results also revealed that Rap1 is necessary for EC sprouting stimulated by Ang-1 but had no significant effect on Ang-1-induced EC migration and adhesion. In contrast, downregulation of VE-cadherin markedly increased the adhesiveness of ECs to the substratum, which resulted in inhibition of Ang-1-stimulated migration. These results revealed that Rap1 is central to the effects of Ang-1 at intercellular junctions of ECs, whereas VE-cadherin is also involved in the adhesion of ECs to the extracellular matrix.
Keywords: angiopoietin-1; angiogenesis; Rap1; VE-cadherin; migration; adhesion; endothelial cells angiopoietin-1; angiogenesis; Rap1; VE-cadherin; migration; adhesion; endothelial cells
►▼ Show Figures 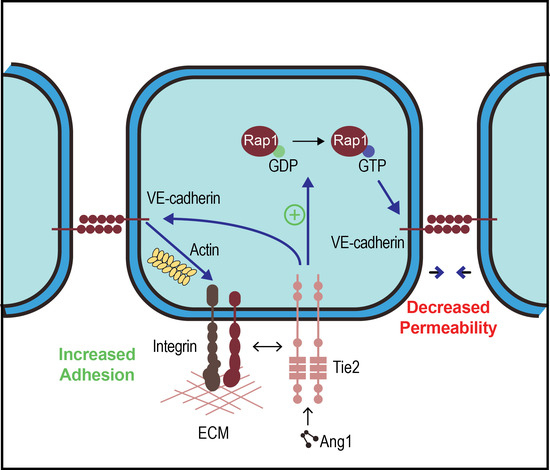