Novel Modulators of Proteostasis: RNAi Screen of Chromosome I in a Heat Stress Paradigm in C. elegans

Proteostasis is of vital importance for cellular function and it is challenged upon exposure to acute or chronic insults during neurodegeneration and aging. The proteostasis network is relevant for the maintenance of proteome integrity and mainly comprises molecular chaperones and two degradation pathways, namely, autophagy and the ubiquitin proteasome system. This network is characterized by an impressive functional interrelation and complexity, and occasionally novel factors are discovered that modulate proteostasis. Here, we present an RNAi screen in C. elegans, which aimed to identify modulators of proteostasis in a heat stress paradigm. The screen comprised genes that are located on chromosome I of the nematode and has identified 185 genetic modifiers, whose knockdown has enhanced the misfolding of a reporter protein upon temperature increase. Subsequently, we evaluated the effect of a distinct number of the identified candidates in an additional C. elegans model strain, which expresses the aggregation-prone PolyQ35::YFP protein. Moreover, we annotated the human orthologs of the identified proteins and analyzed their enrichment in functional clusters and, as appropriate, their association with human neuropathologies. The achieved data collection includes several factors that have already been functionally associated with the proteostasis network, which highlights the potential of this heat stress-based proteostasis screen in order to detect novel modulators of proteome integrity. View Full-Text
Keywords: C. elegans; RNAi screen; proteostasis; proteostasis network; autophagy; UPS; chaperone; neurodegeneration C. elegans; RNAi screen; proteostasis; proteostasis network; autophagy; UPS; chaperone; neurodegeneration
►▼ Show Figures 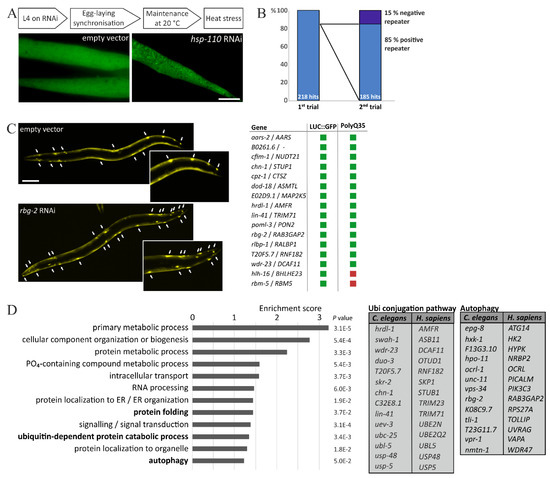