Is there a Chance to Promote Arteriogenesis by DPP4 Inhibitors Even in Type 2 Diabetes? A Critical Review

Sepsis is a systemic disease with life-threatening potential and is characterized by a dysregulated immune response from the host to an infection. The organic dysfunction in sepsis is associated with the production of inflammatory cascades and oxidative stress. Previous studies showed that Aedes aegypti saliva has anti-inflammatory, immunomodulatory, and antioxidant properties. Considering inflammation and the role of oxidative stress in sepsis, we investigated the effect of pretreatment with salivary gland extract (SGE) from Ae. aegypti in the induction of inflammatory and oxidative processes in a murine cecum ligation and puncture (CLP) model. Here, we evaluated animal survival for 16 days, as well as bacterial load, leukocyte migration, and oxidative parameters. We found that the SGE pretreatment improved the survival of septic mice, reduced bacterial load and neutrophil influx, and increased nitric oxide (NO) production in the peritoneal cavity. With regard to oxidative status, SGE increased antioxidant defenses as measured by Trolox equivalent antioxidant capacity (TEAC) and glutathione (GSH), while reducing levels of the oxidative stress marker malondialdehyde (MDA). Altogether, these data suggest that SGE plays a protective role in septic animals, contributing to oxidative and inflammatory balance during sepsis. Therefore, Ae. aegypti SGE is a potential source for new therapeutic molecule(s) in polymicrobial sepsis, and this effect seems to be mediated by the control of inflammation and oxidative damage. View Full-Text
Keywords: Aedes aegypti; salivary gland extract; saliva; sepsis; CLP model; oxidative stress Aedes aegypti; salivary gland extract; saliva; sepsis; CLP model; oxidative stress
►▼ Show Figures 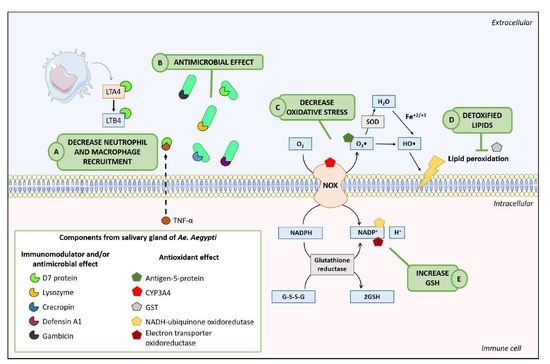