Precision Oncology Beyond Genomics: The Future Is Here—It Is Just Not Evenly Distributed
Previous Article in Journal

Parkin and α-synuclein are two key proteins involved in the pathophysiology of Parkinson’s disease (PD). Neurotoxic alterations of α-synuclein that lead to the formation of toxic oligomers and fibrils contribute to PD through synaptic dysfunction, mitochondrial impairment, defective endoplasmic reticulum and Golgi function, and nuclear dysfunction. In half of the cases, the recessively inherited early-onset PD is caused by loss of function mutations in the PARK2 gene that encodes the E3-ubiquitin ligase, parkin. Parkin is involved in the clearance of misfolded and aggregated proteins by the ubiquitin-proteasome system and regulates mitophagy and mitochondrial biogenesis. PARK2-related PD is generally thought not to be associated with Lewy body formation although it is a neuropathological hallmark of PD. In this review article, we provide an overview of post-mortem neuropathological examinations of PARK2 patients and present the current knowledge of a functional interaction between parkin and α-synuclein in the regulation of protein aggregates including Lewy bodies. Furthermore, we describe prevailing hypotheses about the formation of intracellular micro-aggregates (synuclein inclusions) that might be more likely than Lewy bodies to occur in PARK2-related PD. This information may inform future studies aiming to unveil primary signaling processes involved in PD and related neurodegenerative disorders. View Full-Text
Keywords: familial Parkinson’s disease; PARK2; parkin; α-synuclein; Lewy bodies familial Parkinson’s disease; PARK2; parkin; α-synuclein; Lewy bodies
►▼ Show Figures 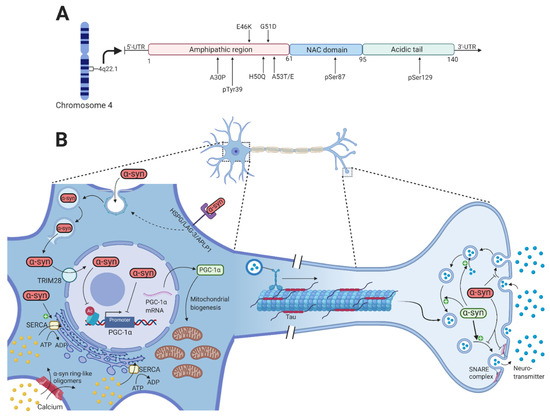