Beyond the Warburg Effect: Oxidative and Glycolytic Phenotypes Coexist within the Metabolic Heterogeneity of Glioblastoma
Previous Article in Journal

The Hippo signaling pathway is a highly conserved pathway involved in tissue development and regeneration that controls organ size through the regulation of cell proliferation and apoptosis. The core Hippo pathway is composed of a block of kinases, MST1/2 (Mammalian STE20-like protein kinase 1/2) and LATS1/2 (Large tumor suppressor 1/2), which inhibits nuclear translocation of YAP/TAZ (Yes-Associated Protein 1/Transcriptional co-activator with PDZ-binding motif) and its downstream association with the TEAD (TEA domain) family of transcription factors. This pathway was recently shown to be involved in tumorigenesis and metastasis in several cancers such as lung, breast, or colorectal cancers but is still poorly investigated in brain tumors. Gliomas are the most common and the most lethal primary brain tumors representing about 80% of malignant central nervous system neoplasms. Despite intensive clinical protocol, the prognosis for patients remains very poor due to systematic relapse and treatment failure. Growing evidence demonstrating the role of Hippo signaling in cancer biology and the lack of efficient treatments for malignant gliomas support the idea that this pathway could represent a potential target paving the way for alternative therapeutics. Based on recent advances in the Hippo pathway deciphering, the main goal of this review is to highlight the role of this pathway in gliomas by a state-of-the-art synthesis. View Full-Text
Keywords: gliomas; glioblastomas; hippo signaling pathway; MST1/2; LATS1/2; YAP/TAZ; TEADs gliomas; glioblastomas; hippo signaling pathway; MST1/2; LATS1/2; YAP/TAZ; TEADs
►▼ Show Figures 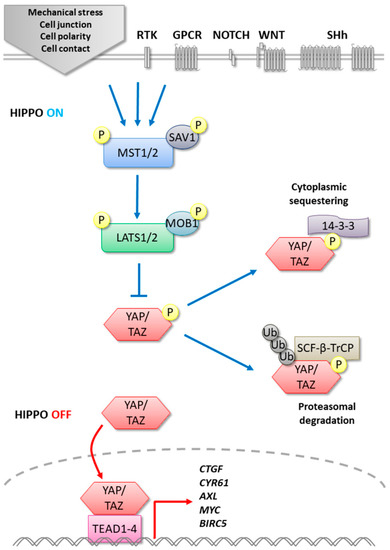