Combine harvesters are an important cause of fires worldwide. The purpose of this work has been to investigate the critical points associated with the risk of fire, identified through a survey distributed to combine owners in Aragon (Spain). Information was collected on the technical characteristics of the machines and, when appropriate, on the characteristics of the generated fires (crop, use of straw chopper, point in which the fire was originated, etc.). Based on the survey data, relationships between the characteristics of the machine and the ignition of a fire were analyzed, and the points of the harvester in which the fire originated were investigated. A statistically significant relationship of fire risk was only found with the number of hectares harvested, in such a way that the risk would be especially high for machines with more than 6000 accumulated ha. 32% of the fires were originated in the engine zone, compared with 31% in the cutting bar and 18% in the bearings and belts. The study was completed with on-site temperature measurements carried out on nine machines in 2018 and 2019, in which temperatures above 250 °C were recorded in the exhaust manifold and in the cutting bar. These temperatures exceeded the ignition thresholds obtained in the flammability studies conducted for wheat residues collected from the harvesters. View Full-Text
Keywords: agricultural machinery; cutting bar; EN ISO/IEC 80079-20-2; flammability; ignition temperature; straw chopper; temperature sensor agricultural machinery; cutting bar; EN ISO/IEC 80079-20-2; flammability; ignition temperature; straw chopper; temperature sensor
►▼ Show Figures 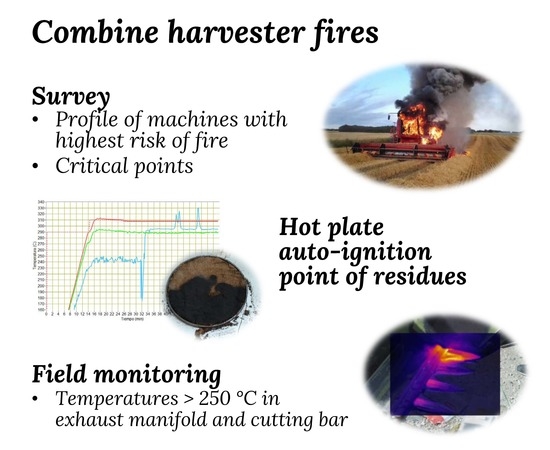