Arbuscular mycorrhizal fungi (AMF) play major roles in nutrient acquisition by crops and are key actors of agroecosystems productivity. However, agricultural practices can have deleterious effects on plant–fungi symbiosis establishment in soils, thus inhibiting its potential benefits on plant growth and development. Therefore, we have studied the impact of different soil management techniques, including conventional moldboard ploughing and no-till under an optimal nitrogen (N) fertilization regime and in the absence of N fertilization, on AMF spore density and soil chemical, physical, and biological indicators in the top 20 cm of the soil horizon. A field experiment conducted over six years revealed that AMF spore density was significantly lower under conventional tillage (CT) combined with intensive synthetic N fertilization. Under no-till (NT) conditions, the density of AMF spore was at least two-fold higher, even under intensive N fertilization conditions. We also observed that there were positive correlations between spore density, soil dehydrogenase enzyme activity, and soil penetration resistance and negative correlations with soil phosphorus and mineral N contents. Therefore, soil dehydrogenase activity and soil penetration resistance can be considered as good indicators of soil quality in agrosystems. Furthermore, the high nitrate content of ploughed soils appears to be detrimental both for the dehydrogenase enzyme activity and the production of AMF spores. It can be concluded that no-till, by preventing soil from structural and chemical disturbances, is a farming system that preserves the entire fungal life cycle and as such the production of viable spores of AMF, even under intensive N fertilization. View Full-Text
Keywords: tillage; nitrogen fertilization; arbuscular mycorrhizal fungi; spore density; microbial activity tillage; nitrogen fertilization; arbuscular mycorrhizal fungi; spore density; microbial activity
►▼ Show Figures 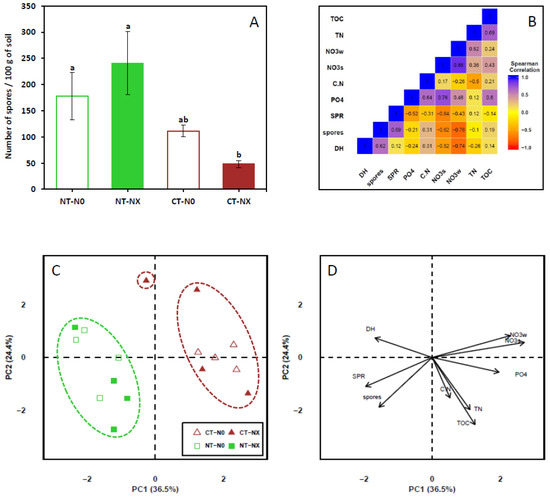