Ecological Adaptability of Some Cultivars and Breeding Samples of Origanum vulgare L.
Next Article in Special Issue

The Case for Grazing Dairy Cows

Nitrogen Intake and Its Partition on Urine, Dung and Products of Dairy and Beef Cattle in Chile

Nitrogen that is excreted through the urine and dung of cattle is an important source of nitrous oxide and ammonia emissions. In Chile, several studies have evaluated nitrogen (N) intake and its partitioning into urine and dung from beef and dairy cattle, however, there are no studies collating all data into one central database, which would allow an estimation of N excretion and its key variables to be developed. The aim of this study was to determine the N partition (milk or meat, urine and dung) and variables influencing the nitrogen use efficiency (NUE) and urinary N excretion of cattle based on a database generated from Chilean studies. The search of studies was carried out using a keyword list in different web-based platforms. Nitrogen excretion into urine and dung was calculated using equations reported in the literature for beef and dairy cattle. Mixed models were used to identify variables influencing the N partitioning. Nitrogen intake and its partitioning into the animal product, urine and dung were higher for dairy compared to beef cattle. For dairy cattle, NUE was influenced by milk yield, the non-fibrous carbohydrates (NFC)/crude protein ratio, acid detergent fiber intake and milk urea N (MUN), while urinary N excretion was influenced by milk yield, MUN and NFC intake. For beef cattle, N intake and its excretion were greater for grazing compared to the confined system, while NUE was greater for confined animals. This database supplies new information on N intake and its partitioning (milk, meat, urine and dung) for dairy and beef cattle, which can be used for the estimation of greenhouse gas emissions from pasture-based livestock in Chile. Additionally, our study supplies new information on nutritional variables determining NUE and urinary N excretion for dairy cattle, which can be used by farmers to reduce N excretion into the environment. View Full-Text
Keywords: cattle; greenhouse gas emissions; nitrogen excretion; pasture; pollution cattle; greenhouse gas emissions; nitrogen excretion; pasture; pollution
►▼ Show Figures 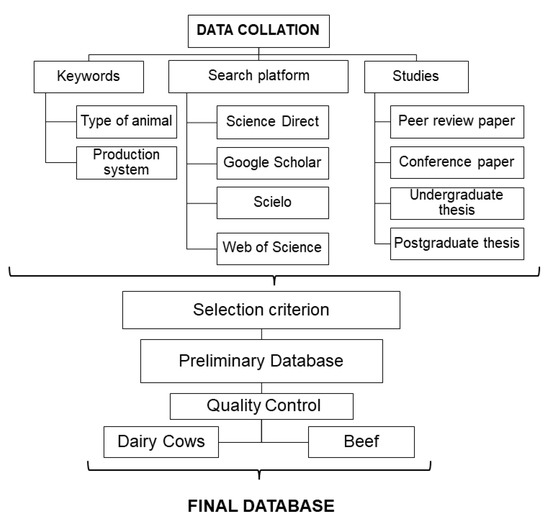