The effect of nitrogen fertigation of two watermelon cultivars grown on the very light soil in the central part of Poland, during 2012–2014, was evaluated. The field experimental design was a split-plot with four replications. The main plot was the drip fertigation with nitrogen applied in two combinations: drip irrigation + broadcasted nitrogen fertilization (DI) used as a control, and drip irrigation + fertigation with nitrogen (DF); where, two cultivars: Bingo and Sugar Baby were used as a split-plot. The phosphorus and potassium fertilizers were applied pre plant in the spring, whereas, three rates of 40 kg ha−1 of nitrogen fertilizer were applied during the growing season. The fertigation was performed using a proportional mixing dispenser. The ripened fruits were harvested progressively as they mature. The marketable fruit yield, the single fruit weight and the number of fruits per plant, were evaluated. Tested factors presented a significant effect in the yield characteristics, further the interaction among the factors was important. DF, comparing to DI, notably improved fruit traits. Bingo cultivar had higher yield than Sugar Baby, but Sugar Baby cultivar produced more fruits than the Bingo under the DF treatment. This study provides the evidence that on a very light soil with low water and nutrients retention capacity the performance of watermelon can be optimized when nitrogen is applied directly through drip irrigation. View Full-Text
Keywords: Citrullus lanatus; cultivar; drip irrigation; fine sand; nitrogen fertigation Citrullus lanatus; cultivar; drip irrigation; fine sand; nitrogen fertigation
►▼ Show Figures 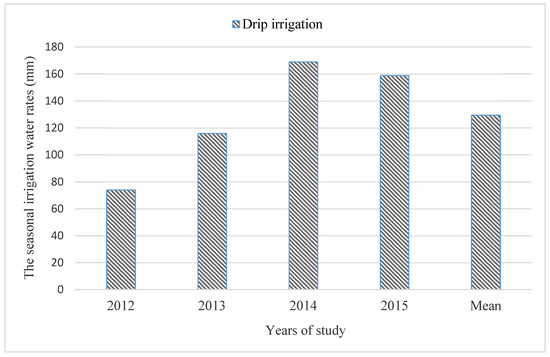