Influence of Chain Stiffness, Grafting Density and Normal Load on the Tribological and Structural Behavior of Polymer Brushes: A Nonequilibrium-Molecular-Dynamics Study
Previous Article in Journal

Copolyesters derived from 1,4-butanediol and constituted also of aliphatic and aromatic dicarboxylate units in a molar ratio of 3:7 were synthesized by a two-step polycondensation procedure. Succinic, adipic, and sebacic acids were specifically selected as the aliphatic component whereas terephthalic acid was chosen as the aromatic moiety. The second synthesis step was a thermal transesterification between the corresponding homopolymers, always attaining a random distribution as verified by NMR spectroscopy. Hybrid polymer composites containing 2.5 wt % of hydroxyapatite (HAp) were also prepared by in situ polymerization. Hydroxyl groups on the nanoparticle surface allowed the grafting of polymer chains in such a way that composites were mostly insoluble in the typical solvents of the parent copolyesters. HAp had some influence on crystallization from the melt, thermal stability, and mechanical properties. HAp also improved the biocompatibility of samples due to the presence of Ca2+ cations and the damping effect of phosphate groups. Interestingly, HAp resulted in a significant increase in the hydrophilicity of samples, which considerably affected both enzymatic and hydrolytic degradability. Slight differences were also found in the function of the dicarboxylic component, as the lowest degradation rates was found for the sample constituted of the most hydrophobic sebacic acid units. View Full-Text
Keywords: poly(butylene terephthalate); copolyesters; hydroxyapatite; nanocomposites; biocompatibility; hydrolytic degradation; enzymatic degradation poly(butylene terephthalate); copolyesters; hydroxyapatite; nanocomposites; biocompatibility; hydrolytic degradation; enzymatic degradation
►▼ Show Figures 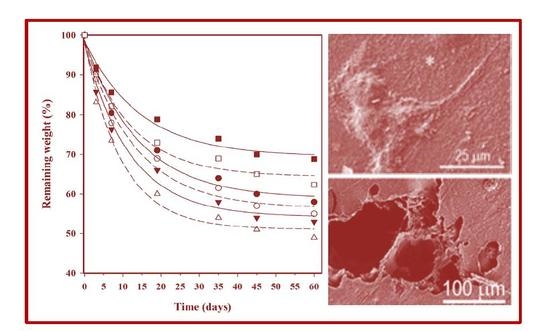