Wood Composites and Their Polymer Binders
Previous Article in Journal

The multifunctional photothermal therapy (PTT) platform with the ability to selectively kill bacteria over mammalian cells has received widespread attention recently. Herein, we prepared graphene oxide-amino(polyethyleneglycol) (GO-PEG-NH2) while using the hydrophobic interaction between heptadecyl end groups of 1,2-distearoyl-sn-glycero-3-phosphoethanolamine-N-[amino(polyethyleneglycol)] (DSPE-PEG-NH2) and graphene oxide (GO). Based on GO-PEG-NH2, the versatile PTT system was constructed with simultaneous selective recognition, capturing, and photothermal killing of bacteria. When the cells undergo bacterial infection, owing to the poly(ethylene glycol) (PEG) chains and positively charged amino groups, GO-PEG-NH2 can specifically recognize and capture bacteria in the presence of cells. Meanwhile, the stable photothermal performance of GO-PEG-NH2 enables the captured bacteria to be efficiently photothermally ablated upon the irradiation of 808 nm laser. Besides, the GO-PEG-NH2 is highly stable in various biological media and it exhibits low cytotoxicity, suggesting that it holds great promise for biological applications. This work provides new insight into graphene-based materials as a PTT agent for the development of new therapeutic platforms.
Keywords: photothermal therapy (PTT); graphene oxide (GO); selective recognition and capturing; antibacterial photothermal therapy (PTT); graphene oxide (GO); selective recognition and capturing; antibacterial
►▼ Show Figures 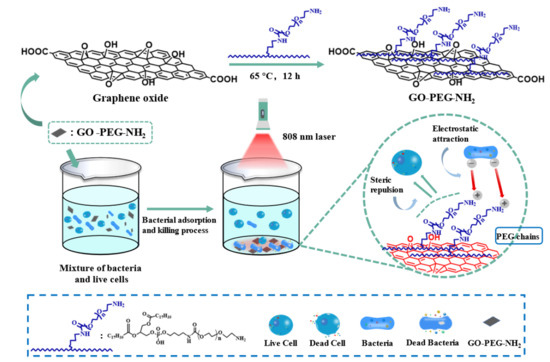