Single-Point Incremental Forming of Two Biocompatible Polymers: An Insight into Their Thermal and Structural Properties
Previous Article in Special Issue

Application of Chitin/Chitosan and Their Derivatives in the Papermaking Industry

The present work deals with the synthesis of micro-structured biomaterials based on chitosan (CTS) for their applications as biocompatible carriers of drugs and bioactive compounds. Twelve dispersions were prepared by means of functional cross-linking with tricarballylic acid (TCA); they were characterized by Fourier transform infrared spectroscopy (FT-IR), modulated temperature differential scanning calorimetry (MTDSC) and scanning electron microscopy (SEM), and their rheological properties were studied. To the best of the authors’ knowledge, no study has been carried out on the influence of CTS concentration, degree of cross-linking and drug loading on chitosan hydrogels for drug delivery systems (DDS) and is investigated herein for the first time. The influence of dispersion composition (polymer concentration and degree of cross-linking) revealed to exert a marked impact on its rheological properties, going from liquid-like to viscoelastic gels. The release profiles of a model drug, diclofenac sodium (DCNa), as well as their relationships with polymer concentration, drug loading and degree of cross-linking were evaluated. Similar to the findings on rheological properties, a wide range of release profiles was encountered. These formulations were found to display a well-controlled drug release strongly dependent on the formulation composition. Cumulative drug release under physiological conditions for 96 h ranged from 8% to 67%. For comparative purpose, Voltaren emulgel® from Novartis Pharmaceuticals was also investigated and the latter was the formulation with the highest cumulative drug release (85%). Some formulations showed similar spreadability values to the commercial hydrogel. The comparative study of three batches confirmed the reproducibility of the method, leading to systems particularly suitable for their use as drug carriers. View Full-Text
Keywords: ionic cross-linking; eco-friendly formulations; thermal transition sol-gel; drug delivery systems; MTDSC; DSC ionic cross-linking; eco-friendly formulations; thermal transition sol-gel; drug delivery systems; MTDSC; DSC
►▼ Show Figures 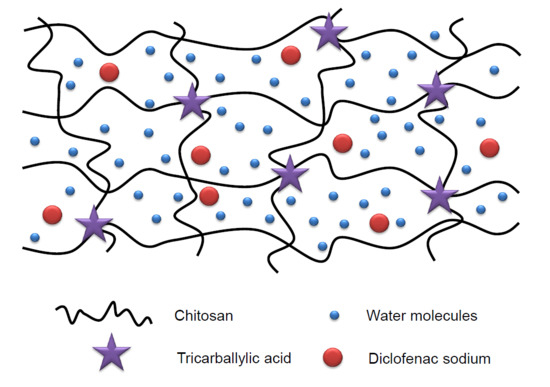