Nanoparticle–Hydrogel Based Sensors: Synthesis and Applications
Previous Article in Journal

Not a Mistake but a Feature: Promiscuous Activity of Enzymes Meeting Mycotoxins

Mycotoxins are dangerous compounds and find multiple routes to enter living bodies of humans and animals. To solve the issue and degrade the toxicants, (bio)catalytic processes look very promising. Hexahistidine-tagged organophosphorus hydrolase (His6-OPH) is a well-studied catalyst for degradation of organophosphorus neurotoxins and lactone-containing quorum-sensing signal molecules. Moreover, the catalytic characteristics in hydrolysis of several mycotoxins (patulin, deoxynivalenol, zearalenone, and sterigmatocystin) were studied in this investigation. The best Michaelis constant and catalytic constant were estimated in the case of sterigmatocystin and patulin, respectively. A possible combination of His6-OPH with inorganic sorbents treated by low-temperature plasma was investigated. Further, enzyme–polyelectrolyte complexes of poly(glutamic acid) with His6-OPH and another enzymatic mycotoxin degrader (thermolysin) were successfully used to modify fiber materials. These catalytically active prototypes of protective materials appear to be useful for preventing surface contact and exposure to mycotoxins and other chemicals that are substrates for the enzymes used. View Full-Text
Keywords: mycotoxin; hydrolysis; organophosphorus hydrolase; sorbent; immobilization mycotoxin; hydrolysis; organophosphorus hydrolase; sorbent; immobilization
►▼ Show Figures 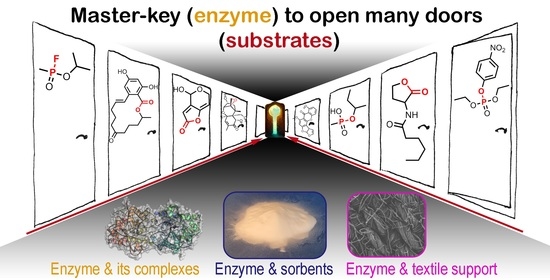