Breast cancer is a leading cause of cancer-related deaths worldwide, predominantly caused by metastasis. Chemokine receptor CCR7 and its ligand CCL21 are implicated in the metastasis of breast cancer to the lymph nodes. Chemokine function is dependent upon binding to their specific chemokine receptors and negatively charged molecules on the cell surface (heparan sulphate). The role of heparan sulphate in CCR7-mediated lymph node metastasis was investigated by creating a non-heparan sulphate binding mutant chemokine CCL21. Mutant-CCL21 was tested in vitro in a range of assays, including cell migration, calcium flux and surface plasmon resonance spectroscopy. Mutant-CCL21 induced leukocyte chemotaxis in diffusion gradients but did not stimulate trans-endothelial migration of breast cancer cells. A murine model was used to assess the potential of mutant-CCL21 to prevent lymph node metastasis in vivo. Lymph node metastasis was significantly reduced by the administration of mutant-CCL21 compared to the control. Targeting chemokine–heparan sulphate interactions may be a promising approach to inhibit chemokine activity and metastasis.

Chemokine receptor CCR7 is implicated in the metastasis of breast cancer to the lymph nodes. Chemokine function is dependent upon their binding to both cell-surface heparan sulphate (HS) and to their specific receptors; thus, the role of HS in CCR7-mediated lymph node metastasis was investigated by creating a non-HS binding chemokine CCL21 (mut-CCL21). Mut-CCL21 (Δ103–134) induced leukocyte chemotaxis in diffusion gradients but did not stimulate trans-endothelial migration of PBMCs (p < 0.001) and 4T1-Luc cells (p < 0.01). Furthermore, the effect of heparin and HS on the chemotactic properties of wild-type (WT) and mut-CCL21 was examined. Interestingly, heparin and HS completely inhibit the chemotaxis mediated by WT-CCL21 at 250 and 500 µg/mL, whereas minimal effect was seen with mut-CCL21. This difference could potentially be attributed to reduced HS binding, as surface plasmon resonance spectroscopy showed that mut-CCL21 did not significantly bind HS compared to WT-CCL21. A murine model was used to assess the potential of mut-CCL21 to prevent lymph node metastasis in vivo. Mice were injected with 4T1-Luc cells in the mammary fat pad and treated daily for a week with 20 µg mut-CCL21. Mice were imaged weekly with IVIS and sacrificed on day 18. Luciferase expression was significantly reduced in lymph nodes from mice that had been treated with mut-CCL21 compared to the control (p = 0.0148), suggesting the potential to target chemokine binding to HS as a therapeutic option. View Full-Text
Keywords: breast cancer; chemokines; metastasis; CCL21 breast cancer; chemokines; metastasis; CCL21
►▼ Show Figures 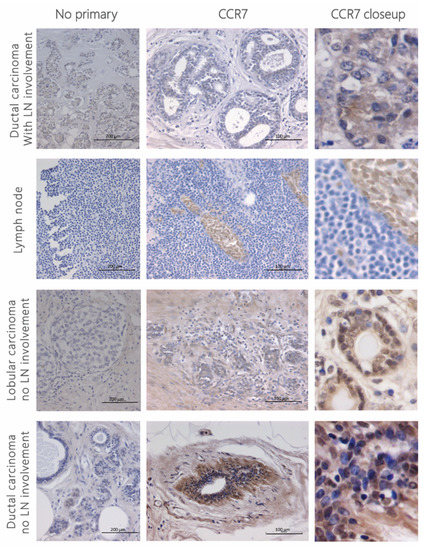