Diffusion tensor imaging (DTI), and fractional-anisotropy (FA) maps in particular, have shown promise in predicting areas of tumor recurrence in glioblastoma. However, analysis of peritumoral edema, where most recurrences occur, is impeded by free-water contamination. In this study, we evaluated the benefits of a novel, deep-learning-based approach for the free-water correction (FWC) of DTI data for prediction of later recurrence. We investigated 35 glioblastoma cases from our prospective glioma cohort. A preoperative MR image and the first MR scan showing tumor recurrence were semiautomatically segmented into areas of contrast-enhancing tumor, edema, or recurrence of the tumor. The 10th, 50th and 90th percentiles and mean of FA and mean-diffusivity (MD) values (both for the original and FWC–DTI data) were collected for areas with and without recurrence in the peritumoral edema. We found significant differences in the FWC–FA maps between areas of recurrence-free edema and areas with later tumor recurrence, where differences in noncorrected FA maps were less pronounced. Consequently, a generalized mixed-effect model had a significantly higher area under the curve when using FWC–FA maps (AUC = 0.9) compared to noncorrected maps (AUC = 0.77, p < 0.001). This may reflect tumor infiltration that is not visible in conventional imaging, and may therefore reveal important information for personalized treatment decisions. View Full-Text
Keywords: glioblastoma; DTI; FA; deep learning; recurrence prediction glioblastoma; DTI; FA; deep learning; recurrence prediction
►▼ Show Figures 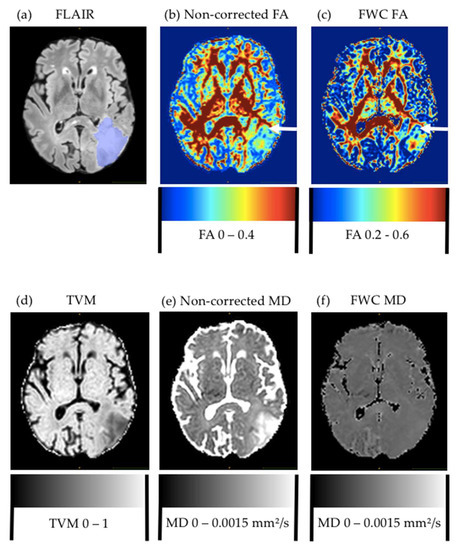