There has been renewed interest in radiation effects on the circulatory system. Here, we analyzed prelesional changes in the descending thoracic aorta of wild-type mice up to six months after a single acute exposure to 0 or 5 Gy of 137Cs γ-rays. We found that irradiation promoted structural disorganizations and detachment of the aortic endothelium, enhanced vascular permeability, and led to partial loss of the aortic endothelium, decreases in endothelial nitric oxide synthase, and adherens junction proteins in the aortic endothelium, and increases in inflammation and macrophage markers in the aorta. These findings suggest that irradiation causes vascular damage manifested as endothelial cell loss and increased vascular permeability, and that a decrease in adherens junction and an increase in inflammation lead to macrophage recruitment, which is thought to be involved in the early stage of atherosclerosis.

There has been a recent upsurge of interest in the effects of ionizing radiation exposure on the circulatory system, because a mounting body of epidemiological evidence suggests that irradiation induces cardio- and cerebrovascular disease at a much lower dose and lower dose rate than previously considered. The goal of our project is to determine whether dose protraction alters radiation effects on the circulatory system in a mouse model. To this end, the use of wild-type mice is pivotal albeit without manifestation of vascular diseases, because disease models (e.g., apolipoprotein E-deficient mice) are prone to hormetic responses following protracted exposures. As such, here, we first set out to analyze prelesional changes in the descending thoracic aorta of wild-type mice up to six months after a single acute exposure to 0 or 5 Gy of 137Cs γ-rays. Scanning electron microscopy demonstrated that irradiation facilitated structural disorganizations and detachment of the aortic endothelium. The Miles assay with an albumin-binding dye Evans Blue revealed that irradiation enhanced vascular permeability. Immunofluorescence staining showed that irradiation led to partial loss of the aortic endothelium (evidenced by a lack of adhesion molecule CD31 and 4′,6-diamidino-2-phenylindole (DAPI) signals), a decrease in endothelial nitric oxide synthase and adherens junction protein (vascular endothelial (VE)-cadherin) in the aortic endothelium, along with an increase in inflammation (tumor necrosis factor (TNF)-α) and macrophage (F4/80) markers in the aorta. These findings suggest that irradiation produces vascular damage manifested as endothelial cell loss and increased vascular permeability, and that the decreased adherens junction and the increased inflammation lead to macrophage recruitment implicated in the early stage of atherosclerosis. View Full-Text
Keywords: ionizing radiation; aorta; vascular permeability; vascular damage; inflammation ionizing radiation; aorta; vascular permeability; vascular damage; inflammation
►▼ Show Figures 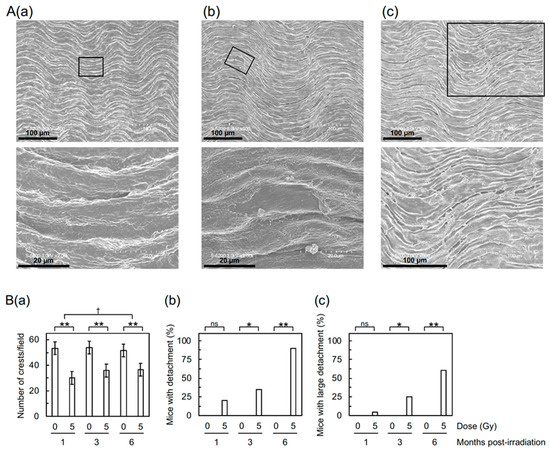