Colorectal Cancer and Bone Tissue: Fantastic Relations and Where to Find Them

The fibroblast growth factor/fibroblast growth factor receptor (FGF/FGFR) system represents an emerging therapeutic target in breast cancer. Here, we discussed previous studies dealing with FGFR molecular aberrations, the alterations in the FGF/FGFR signaling across the different subtypes of breast cancer, the functional interplay between the FGF/FGFR axis and important components of the breast microenvironment, the therapeutic usefulness of FGF/FGFR inhibitors for the treatment of breast cancer.

One of the major challenges in the treatment of breast cancer is the heterogeneous nature of the disease. With multiple subtypes of breast cancer identified, there is an unmet clinical need for the development of therapies particularly for the less tractable subtypes. Several transduction mechanisms are involved in the progression of breast cancer, therefore making the assessment of the molecular landscape that characterizes each patient intricate. Over the last decade, numerous studies have focused on the development of tyrosine kinase inhibitors (TKIs) to target the main pathways dysregulated in breast cancer, however their effectiveness is often limited either by resistance to treatments or the appearance of adverse effects. In this context, the fibroblast growth factor/fibroblast growth factor receptor (FGF/FGFR) system represents an emerging transduction pathway and therapeutic target to be fully investigated among the diverse anti-cancer settings in breast cancer. Here, we have recapitulated previous studies dealing with FGFR molecular aberrations, such as the gene amplification, point mutations, and chromosomal translocations that occur in breast cancer. Furthermore, alterations in the FGF/FGFR signaling across the different subtypes of breast cancer have been described. Next, we discussed the functional interplay between the FGF/FGFR axis and important components of the breast tumor microenvironment. Lastly, we pointed out the therapeutic usefulness of FGF/FGFR inhibitors, as revealed by preclinical and clinical models of breast cancer. View Full-Text
Keywords: breast cancer; FGF/FGFR system; tumor microenvironment; oncogenic signaling; targeted therapies breast cancer; FGF/FGFR system; tumor microenvironment; oncogenic signaling; targeted therapies
►▼ Show Figures 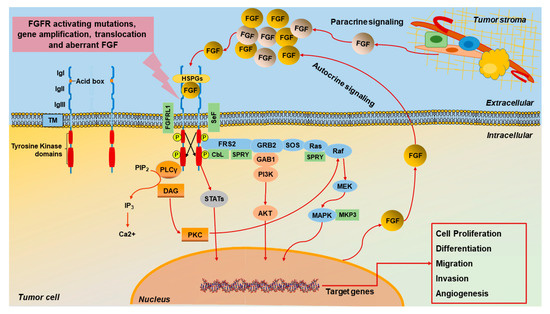