Gastric cancer is an aggressive and heterogeneous malignancy that often varies in presentation and disease among racial and ethnic groups. The Alaska Native (AN) people have the highest incidence and mortality rates of gastric cancer in North America. This study examines molecular markers in solid tumor samples from eighty-five AN gastric adenocarcinoma patients using next-generation sequencing, immunohistochemistry, and in situ hybridization analysis. AN patients have a low mutation burden with fewer somatic gene mutations in their tumors compared to other populations, with the most common mutation being TP53. Epstein-Barr virus (EBV) was associated with 20% of AN gastric cancers, which is higher than the world average of 10%. The inflammation marker, cyclooxygenase-2 (COX-2), is highly expressed in patients with the lowest survival rates. Mismatch repair deficiency was present in 10% of AN patients and was associated with patients who were female, 50 years or older, gene mutations, and tumors in the distal stomach. Program death-ligand 1 (PD-L1) was expressed in 14% of AN patients who were more likely to have MMR deficiency, EBV-associated gastric cancers, and mutations in the PIK3CA gene, all of which have been linked to clinical response to PD-1 inhibitors. These studies suggest a portion of AN gastric cancer patients could be candidates for immunotherapy. Overall, this study highlights future avenues of investigation for clinical and translational studies, so that we can improve early detection and develop more effective treatments for AN patients. View Full-Text
Keywords: Alaska Native people; signet ring; diffuse; Helicobacter pylori; Epstein-Barr virus; COX-2; MUC1; TP53; PD-L1; Mismatch repair deficiency Alaska Native people; signet ring; diffuse; Helicobacter pylori; Epstein-Barr virus; COX-2; MUC1; TP53; PD-L1; Mismatch repair deficiency
►▼ Show Figures 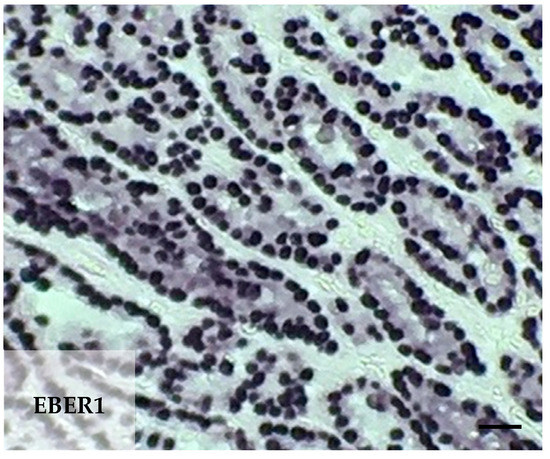