Contribution of mTOR and PTEN to Radioresistance in Sporadic and NF2-Associated Vestibular Schwannomas: A Microarray and Pathway Analysis

The use of radiation treatment has increased for both sporadic and neurofibromatosis type 2 (NF2)-associated vestibular schwannoma (VS). However, there are a subset of radioresistant tumors and systemic treatments that are seldom used in these patients. We investigated molecular alterations after radiation in three NF2-associated and five sporadically operated recurrent VS after primary irradiation. We compared these findings with 49 non-irradiated (36 sporadic and 13 NF2-associated) VS through gene-expression profiling and pathway analysis. Furthermore, we stained the key molecules of the distinct pathway by immunohistochemistry. A total of 195 differentially expressed genes in sporadic and NF2-related comparisons showed significant differences based on the criteria of p value < 0.05 and a two-fold change. These genes were involved in pathways that are known to be altered upon irradiation (e.g., mammalian target of rapamycin (mTOR), phosphatase and tensin homolog (PTEN) and vascular endothelial growth factor (VEGF) signaling). We observed a combined downregulation of PTEN signaling and an upregulation of mTOR signaling in progressive NF2-associated VS after irradiation. Immunostainings with mTOR and PTEN antibodies confirmed the respective molecular alterations. Taken together, mTOR inhibition might be a promising therapeutic strategy in NF2-associated VS progress after irradiation. View Full-Text
Keywords: neurofibromatosis type 2; microarray analysis; radioresistance; signaling; vestibular schwannoma neurofibromatosis type 2; microarray analysis; radioresistance; signaling; vestibular schwannoma
►▼ Show Figures 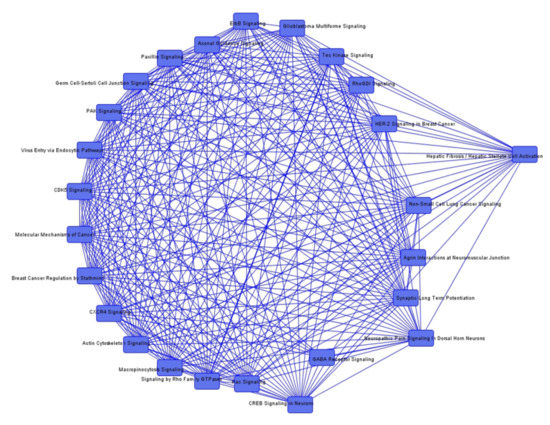