What Is the Fuss about Integrins and the Tumor Microenvironment?
Previous Article in Journal

by Nicholas F. Brown and

TGFβ (transforming growth factor-beta) is a pleotropic cytokine with contrasting effects in cancer. In normal tissue and early tumours, TGFβ acts as a tumour suppressor, limiting proliferation and inducing apoptosis. However, these effects are eventually abrogated by the loss or inactivation of downstream signalling within the TGFβ pathway, and in established tumours, TGFβ then acts as a tumour promotor through multiple mechanisms including inducing epithelial-to-mesenchymal transition (EMT), promoting formation of cancer-associated fibroblasts (CAFs) and increasing angiogenesis. TGFβ is secrereted as a large latent complex and is embedded in the extracellular matrix or held on the surface of cells and must be activated before mediating its multiple functions. Thus, whilst TGFβ is abundant in the tumour microenvironment (TME), its functionality is regulated by local activation. The αv-integrins are major activators of latent-TGFβ. The potential benefits of manipulating the immune TME have been highlighted by the clinical success of immune-checkpoint inhibitors in a number of solid tumour types. TGFβ is a potent suppressor of T-cell-mediated immune surveillance and a key cause of resistance to checkpoint inhibitors. Therefore, as certain integrins locally activate TGFβ, they are likely to have a role in the immunosuppressive TME, although this remains to be confirmed. In this review, we discussed the role of TGFβ in cancer, the role of integrins in activating TGFβ in the TME, and the potential benefits of targeting integrins to augment immunotherapies. View Full-Text
Keywords: integrins; TGFβ; αvβ6; tumour microenvironment integrins; TGFβ; αvβ6; tumour microenvironment
►▼ Show Figures 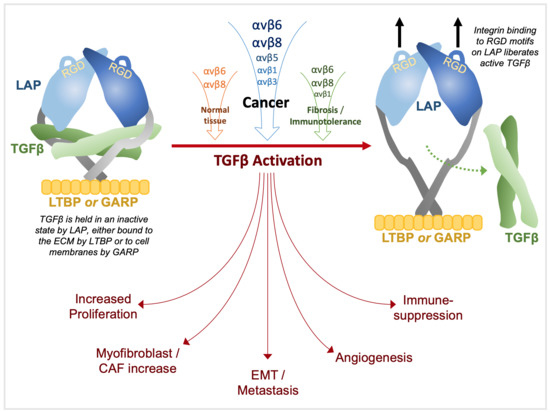